During the whole Chick-fil-A fiasco I watched in horror as people attacked one another all in the name of a stupid sandwich. I saw my gay friends and family being hurt by the hate, ignorance and anger directed toward our community. I also saw many straight friends and family attack the very core of who I am and what I stand for. I must admit that I was hurt.

I cried many tears over the venom that spewed forth from people who I thought would take the side of what is human and just. I was “un-friended” by several on Facebook as a result of my standing up for my family. I was also called narrow-minded by one specific “friend” from high school; narrow-minded because I would not denounce my gay community and our rights as humans. So, finally, I retreated.

I stopped reading about the support days and how this was all about free speech. I stepped back from reading people’s posts about fairness and equality. I put my head in the sand. This action of retreat was so far removed from who I am that I grew a bit ashamed. I didn’t know what to do to help our community. I wondered if I was strong enough to do anything at all.

When I finally started to peep out of my hidey-hole, I looked at what others were doing. I wondered what my first step should be to reclaim the proud lesbian that I knew mysef to be. Finally I heard from the deep recesses of my being – “Write,” it said. “Do what you do best. Spread the word.” So I decided to do just that! I decided to find and feature people who were fighting back against the rhetoric so I began to search.

Imagine my surprise when I saw a clip of two young girls singing a song to Chick-fil-A and realized that I knew one of them. Chrissy Chambers had dated my son a few years back. She had visited our home and my son had flown to Mississippi to visit hers. They had gone to prom together. I knew her as a quiet but strong willed young woman with a love of acting. Now, here she was with her girlfriend, Bria, singing a fun little ditty about homosexuals. I knew that I had to get in touch with both of them and find out how two young 20-somethings got the moxie to put it all out there.

Following is a transcript of my talk with Chrissy Chambers and Bria Kam. I hope you enjoy getting to know two very talented, caring and in love young women. Show your support by visiting their websites and Facebook pages. You may even want to buy their song knowing that you decide how much you want to pay for it and 50% of all proceeds will go to Freedom to Marry, a group that fights for gay marriage. Please support them so they can keep making music for us. 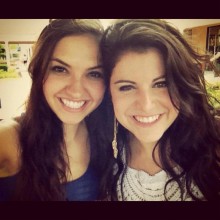 So, Chick-fil-A got you really riled up, huh? Tell me why.

Bria:  Ha, yeah, I guess you could say that. We have been on a mission ever since Dan Cathy spoke out against homosexual marriage. We do want to make one thing very clear though – our argument is not about Cathy’s freedom of speech; it is about the fact that a huge company supports organizations that prevent homosexuals from equal rights. Plain and simple.

How did the video/song come to be?

Chrissy: Wednesday’s customer appreciation day was the real turning point for us. We went to show our support by ordering water, and kissing in front of the “Welcome to Chick-Fil-A” sign. As we left we began talking about an idea to write a song that we could show to the world.

Bria: When I got home I sat down at my piano inspired, not mad, and wrote the song in about two hours.

What made you want to take it mainstream?

Bria: We both had the desire to have our voices heard; we wanted to do it in a peaceful, silly way. We went and protested at multiple Chick-Fil-As, but we knew that that wouldn’t be enough. By making a video, we knew we had the ability to reach the masses and really have our voices heard. Now our main goal with this video is to help raise money for organizations like Freedom To Marry.

Tell me about the feedback, both positive and negative.

Bria: It’s been very mixed, Thankfully it’s taken a more positive turn in the last two days, because the first responses were pretty brutal. Here is an example of some of the things people have said to us, “You guys are just a couple of trash digging fag*ot psychopath, homosexual whores, cool hope you get HIV bitch.” Let’s just say we’ve never read the word skank so many times in our lives. But it’s when we read comments like this, “You two make a beautiful couple and what you’re doing is helping more people than you know. Thank you,” and have multiple people coming out to us on Facebook, then it makes all the harassment worth it.

How do your families feel about the fact that you took this stand so publicly?

Chrissy: My family has shown such strength through all of this. I’m from small town Clinton, Mississippi where they don’t regularly wave the pride flag. I came out less than a year ago, and ever since, my parents and my two older sisters have been my backbone, filling me with courage and love. I couldn’t ask for anything more amazing that the openness and support my family has given to me since day one.

Bria: My parents have always been super supportive and very involved. I came out when I was 16, and have felt completely adored both before and after I came out. My family is fully aware of how defiant of the norm that both Chrissy and I tend to be, so it’s no surprise that we both turned out to be performers and it’s even less of a surprise that we both have chosen to stand up for our beliefs.

Chrissy, I’ve known you for a while now; actually my son took you to prom. Have you always known you were gay?

Once you knew that Bria was the one, was it hard coming out in rural Mississippi?

Chrissy: When I came out, I trusted my own instincts that my family would be supportive. In regard to Mississippi, everybody else’s opinions, frankly, do not matter.

How did you two meet?

Chrissy: It was pretty romantic, I went out with some friends in Atlanta and in my mind I wanted to meet a female performer. I had never dated a girl at that point and sure enough I walked into my first ever gay bar and this beautiful brunette approached me. We were both pretty crazy about each other ever since.

How long have you been together?

Bria: We have been together nine months now.

Have you felt any fear of retribution since the video hit?

Bria: It was only two days ago when my friend Marshall said to me, “Bria you girls need to be careful. You are a real target to predators,” that I finally stopped and realized, wow, we really put ourselves out here and that’s terrifying because you can’t turn back. But I know that the pros outweigh the cons and that we’re fighting for equality and there’s no such thing as an easy fight.

What do you hope to accomplish with your new found voice?

Bria: I keep having this reoccurring dream. Chrissy and I end up on the “Ellen” show and at the very end of our interview Ellen goes, ” Well, we have a surprise for you,” and she pulls out this check for $500,000 and she says, “This goes to any charity of your choice.” I know that seems a little eager, but you can’t really help where your dreams take you.

What goals do you have moving forward with this?

Bria: We have many goals, raising a couple million to compete with Dan’s contribution would be a great start, but mostly we just want to spread awareness.

Any new songs that we can look forward to?

Bria: Well, of course! We have two that are pretty much written. We plan on filming one tonight actually entitled, “I Have Two Moms.” We also have so many more ideas that we are eager to put into action. We love that there is a great avenue for our creativity and for our voice.

Who do you hope to reach with your message?

Chrissy: That’s a hard question. We would say the gay community, in particular the troubled youth. We want them to know that there are those of us out there fighting on behalf of them. But, even more, we hope to reach the close-minded who fail to see the homosexual fight.

Bria: I guess we would have to say that we hope to reach everyone in the whole entire world.

Do either or both of you have a message to Dan Cathy?

Both: Your food is delicious we’re really going to miss it.

There are so many LGBTQ teens and adults who are afraid to come out for many reasons. What would you like to say to them?

Bria: Life is hard, and being gay doesn’t make it any easier. Just remember we only have one life, so live it for yourself and not for others’ approval. And don’t allow others to define you by your sexuality. Most importantly always remember to appreciate your support system.

Your song and interviews have been featured on several media outlets now. Name a few.

Chrissy: The New York Times Blog, The Advocate, After Ellen, and Project Q.

What are your hopes for the gay marriage issue?

What are your hopes for your relationship?

Chrissy: Bria and I are taking in every moment with each other and enjoying our new found love. The fact that we both feed off of each other’s craft, mine being acting and Bria’s being singing, has allowed us a unique bond and purpose that has strengthened our relationship.

Any last words or a song that you would like to leave people with?

Chrissy: I’m not quite sure why this song came to me, but it feels appropriate. “Seasons of Love” from “Rent”. All anybody wants in life is love; homosexuals are no different. I wish people could strip away all their insecurities and just get to the core — that life is about love, that’s what this song is about and that’s what we are about.

Lorraine Howell is not your average housewife – she’s the Happy Lesbian Housewife. She is also the amazingly gifted writer behind the hit blog of the same name.