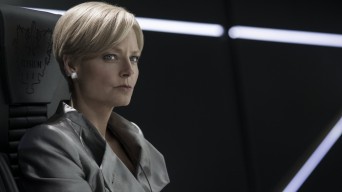 Jodie Foster stars as the antagonist in Neill Blomkamp’s “Elysium,” making her one of the few female villains on screen this summer. In a new interview with EW.com, however, Blomkamp revealed that Foster’s character was initially written as a male, before he had a change of heart. It was then that Foster entered into his thinking for the role.

“I thought, ‘That would be f–king awesome, but there’s just no way,” Blomkamp said about casting Foster. “But then, within, like, a day I had a meeting with her and she said, ‘I want to play it.’ I was like, ‘Holy sh-t!'”