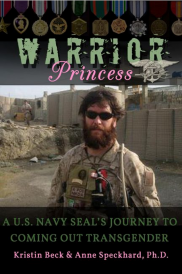 A former Navy Seal has come out as transgender, revealing his true identity as a woman. Kristin Beck, 46, formally known as Chris Beck, served as a US Navy Seal for 20 years, ending her term in 2011.

On Saturday, June 1, Beck came out with her memoir, “Warrior Princess: A U.S. Navy Seal’s Journey To Coming Out Transgender.”

Many believe that the military represents the ultimate masculine feat. So what does it mean when a “man’s man,” with a scruffy beard and armed with killing machines, comes out as a woman? How does this challenge conventions of masculinity and femininity? And what does it say about gender as a whole?