It’s Pride season and it’s time to party! I’ve been getting a ton of questions from women in their 30’s about where they can go to meet and party with women their own age. Lovelies, I have an answer. It’s a queer party in Brooklyn called Prime and it’s run by former Ms. Lez Drae Campbell. In her own words, Prime is the queer party for grown folks… and it’s specifically geared toward queers over 30 and the people who love them! Their pride party takes place this Saturday at JACK (505 1/12 Waverly, Brooklyn). I was lucky enough to get to sit down with Drae to get the inside track on how Prime came to be.

How did you brainstorm the vision behind Prime?

The vision for Prime is ever evolving. Basically, I want to make a fun party that doesn’t treat older people as if they’re “old.” Just because I’m over 30 doesn’t mean I want to stand around having important conversations or doing whatever is expected of my age. We all need to blow off steam and dance and laugh and feel awkward and hook up and whatever it is you do at a party. Just be social sometimes.

I’m inspired by other successful Brooklyn parties such as Yes Ma’am , Hey Queen and Azucar. I’m also inspired by the queer community.

When it comes to 30 somethings, what are some of the obstacles to finding a place to meet new friends or potential partners?

I feel that nightlife is mostly geared toward young people. The parties that are geared toward older people are geared toward our professional lives. Our work is important but it can easily be mixed with our imaginative, fun side. It’s a facade that acting mature means you are mature. I often find it’s the opposite. Other obstacles are that lots of people over 30 are coupled up and feel that going to a party is for single people or young people. 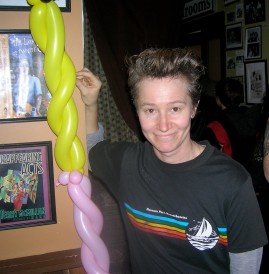 How does Prime try to help smooth over some of the social challenges of being here, queer and over 30?

I’ve noticed that lots of people like to make jokes about Prime being the older people’s party, it starting early and lots of being old type jokes. I love that. I like that we can laugh at ourselves. It creates community within community as well.

A few Prime parties have featured queer performers. Is it important to you to help promote artists at the event?

Absolutely. I’m an entertainer and a performer myself, so I’m very interested in featuring performers and entertainers as part of the event.

We’ve had lots of burlesque at Prime, but we also had a performance from the hit musical “The Lesbian Love Octagon,”  we’ve had rapper Dio, ‘The Native American Gandih,” burlesque performer Divina Gransparkle and for our Prime Pride party we will be playing the films of renowned photographer Katrina Del Mar on repeat while we dance. AND, we will have free treats and vegan goodies from the new queer owned baked good company, Mister Sister, as well as affordable homemade jello shots from Mizz June of June-O shots.  Love having all these self-made women and queers offering their amazing talents. June 22 is gonna be like some crazy amazing queer pride carnival. Can’t wait!

Also, we have one really special thing at Prime that you probably won’t find anywhere else. It’s called “The Woo Corner.” Basically, there’s this amazing woman named Shaina who comes to the party and people line up and fight to see her. She does ‘unblockings’ and intuitive readings. She has an uncanny knack for reading people and helping them refocus. It’s also a great conversation starter and taps into a lot of stuff you think about more seriously as you get older. She’s really great in matters of love, success, money. All that stuff. She’s helped me. She’s awesome.

I think the success of Prime has a lot to do with DJ Noa D. Noa is a great, creative, hardworking DJ who knows how to vibe off the crowd. Noa plays the old stuff that we like and the hits that the kids love as well.  When Noa spins, people do not stop dancing. At our Pride party on June 22, we’re gonna have both NOA and DJ Shomi Noise. If you haven’t heard Shomi spin, come to this party.

Prime is held at JACK, for now. Is it hard to convince a straight venue to use space for queer party?

Jack is a theater and event space. Alec Duffy, who I know from the the theater world, is my contact. From what I can tell, Alec and JACK are interested in making JACK a part of the community it is in, be it queer, straight or what have you. They do a lot of amazing work and a couple other queer events.  I haven’t had any trouble at all.  Alec was very interested and open about making JACK a safe, queer space for Prime.

What are some of your most memorable Prime stories?

I had several people tell me they met someone or made a date or got a number at Prime. That’s the best. Other than that, whatever happens at Prime, stays at Prime. We are grown folks, after all.

Want to go to Prime? RSVP on their FB page.