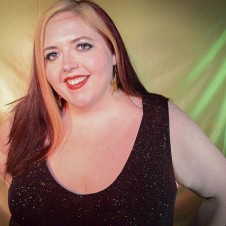 A few years ago a friend of mine suddenly got a girlfriend. We were besties and spent a lot of time together, so I wondered why I was feeling weird about it. I was definitely happy for her, I liked her new beau and I was excited for her to get laid. I sat with the feelings for awhile and I realized what I was feeling was fear—specifically fear of change. I knew that changes in our friendship were bound to happen. We were both single and had a lot of nights free that we spent together. Eventually that situation changes.

I parceled it out and realized that the changes were really triggering my fear of abandonment. My parents divorced when I was 18 months old and my dad was mostly out of the picture while I was growing up. That’s a pretty classic recipe for adult fear of abandonment.

Once I could label that it gave me something to do on my side of the street. I could address my fear of abandonment without blaming or getting mad at my friend just for being happy. I don’t ever want to be mad at my friends for following their hearts and being happy! I want them to be happy. This fear of abandonment is something I’ve worked diligently to remove over the last several years, and it involves a lot of embracing the velocity of change.

I’ve noticed my friends going through a ton of big changes lately. Huge new jobs—dream jobs. Sudden moves. Losses of many kinds. A lot of them have gotten into romances in the last few weeks–it reminds me so clearly of that time where I thought I was going to lose my friend. I’m still having to remind myself often that I’ve weathered these kinds of friendship changes before and it is going to be okay. 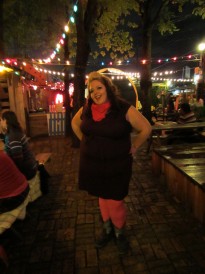 Being a hipster in Austin, TX at their monthly Femme night.

I’m positive all of these big changes aren’t just isolated to my friends. Since this is probably relevant to my readers, too, I thought I would do a round-up of some of the things I’ve learned along the way about embracing the velocity of change.*

1.Accept that change is part of living.

I like to remind myself that when things are changing and tranforming that I’m really living. The only constant in life is change. When I get a little dizzy with the “too much too soons” about change (because sometimes the good and the bad changes seem to happen in a flash without warning) I remind myself of that Pearl Jam song titled Elderly Woman Behind the Counter in a Small Town. For some reason, when I was a fourteen year old devout Pearl Jam fan I heard that song and I would get so afraid that would be me—changed by not changing at all. And given how resistant I was to change at that age (and for many, many years after) it is a miracle I have gotten as far as I have.

I’m also the kind of person who initially resists even the little changes (I have feelings when my roommate moves around the appliances on our countertops), so my square one about change is generally negative. Accepting change as a constant has helped me hop away from that negative box faster than I used to.

Since change in life is a constant, accepting that as true—we cannot grip the happy times just as we cannot escape all the hard times—is actually a relief. When I’m having a shitty feeling I like to chant to myself, “Everything is temporary.” That helps.

Re-envisioning change as a good thing, a sign that my life is dynamic and magical, works for me. 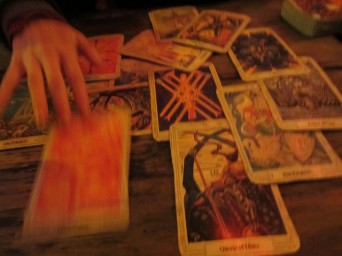 Having my cards read by a roaming psychic.

2. Life begins at the end of your comfort zone.

Similar to the sentiment above, sometimes seeking out change is a really good thing. I’ve made big changes in my life before—I moved across the country at age 21. That was the first big thing I ever chose to do that forever altered the direction of my life. And it wasn’t my first choice, I really wanted to go to law school at my alma mater but I didn’t get in. Rather than hang out another year in Davis and re-apply I just bit the bullet and moved to Camden, NJ.

This was absolutely the best thing I did for myself at that young age. Without friends, a sense of safety or comfort, I really had to learn who I was. And I found myself. The year after I moved I started identifying as queer, made peace with my body and learned that femme was a thing you could be and it was awesome. I don’t know how long those changes would have taken if I’d never moved. I don’t know if those changes would have ever happened! I had no idea how resilient I was until I had to be. 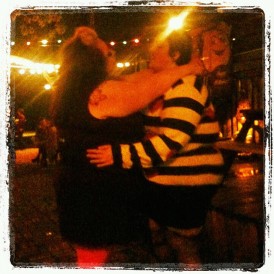 3. Small changes are good practice for the big ones.

Despite my desire to see change as a good thing, I remain a contented, homebody earth sign. I am so comfortable with things I’m familiar with I have to consciously seek out the discomfort of change. I try to push myself once a month to go to an event that’s out of my scene, I encourage myself to do new stuff. The weird panic I feel even for something as small as taking an unfamiliar subway stop is actually great practice for the big changes I have no control over. The tiny panics are prep. And once I’ve done it once it expands my worldview just a little bit more.

I also like to instigate change just to shake up my energy. Moving things around in my room, doing a purge of a drawer, slightly changing my hair, getting a piercing or a tattoo, going on a trip, these all help me feel change energy in order to shift my perspective on my life. 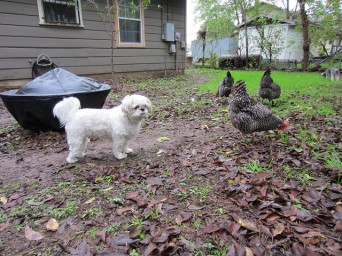 4. Remember all the times I weathered change.

When I started getting that panic about, “OMG the summer is ending and all of my besties are in relationships and I am going to spend all of my Saturday nights alooooooone,” it was helpful to stop and remind myself I’ve been through this before. Some friends just bail when they start dating something. That’s not about me at all. (You know, when they become the “I have to check ‘our schedule’ friends.” And the friends I have now slipped in there for the friends who slipped away. It’s the ebb and flow of life. My closest friends, our relationships have weathered a ton of changes. Including long stretches of not talking or moving long distances. But those are the kinds of friendships where you can pick up the phone and it’s as though no time has passed at all.

I’ve realized I never know what a friendship is going to look like when it starts and it is only time that tells me whether it will endure the shifts in our lives.

Just like friendships, I’ve gone through a ton of other changes that, at first, felt like a huge crisis but eventually became great opportunities. The whole memoir I’m writing is basically about how I weathered some tremendous changes in my life. (My wedding was called off six months out, I lost my job of five years and six months later was forced out of my apartment.) The good thing about those changes was (spoiler alert) I learned how resilient I am.

When I got laid off again by a small business I worked at for a three years, I learned it definitely gets easier the second time around. Applying this even to unfamiliar change is really helpful to shift my perspective from fear to curiosity. I don’t know what life is bringing me with each new change, but I know I have a choice about how I look at it. 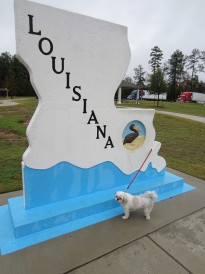 We were in Louisiana long enough to stop for gas and this photo at a rest stop. Definitely need to get back there and do NOLA!

5. Use your shitty feelings to teach you about yourself.

As someone who likes to learn and grow, I’ve found that often my shitty feelings are trying to teach me something about myself. Like how my panic around my bestie getting booed up taught me about my fear of abandonment, often there’s a lesson in my resistance to change.

Leaning into the shitty feelings is something I learned from my life coach when I was being life coached by Lynnee Breedlove. He told me once that if you imagine shitty feelings like an ocean wave that going through them is the best way to get to the other side. (Rather than fight them or just get out of the ocean altogether.) He said he likes to send up a prayer of “Thanks” whenever he’s facing a yucky change, reminding him to stay in gratitude.

I’ve got a couple of book recommendations. One is by SARK, a thought leader I enjoy who writes playful and deep books. Glad No Matter What: Transforming Loss and Change into Gift and Opportunity is an amazing book! SARK details a year where she lost a partnership, the death of her mother and her beloved cat companion. She walks through the process of turning these losses into opportunities to grow. It’s playful and deep and taught me a lot about learning how to embrace changes as they come. There are a ton of questions to ask yourself, workbook style. But even the narrative alone, if you’re not ready for the work, is worth the read. 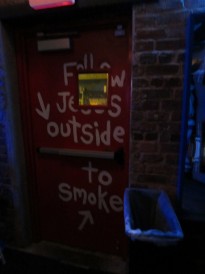 At Sister Louisa’s Church of the Living Room and Ping Pong Emporium in Atlanta.

For the spiritually inclined, I also really enjoy Transitions by Julia Cameron. She wrote the Artist’s Way, so when I saw this in a tiny twelve step bookstore I visited when I was traveling cross country I snatched it up. Lately I’ve been reading the bite size reflections on change before I go to bed. It’s really amazing perspective on the good elements of change that we often can’t see through our pain. I like it a lot. It’s non-denominational and talks about God in the Spirit/higher power sense.

The result of my friend getting booed up years ago? We drifted apart. But it wasn’t nearly as hurtful or catastrophic as my panic at the time acted like it would be. I weathered the changes in our friendship and I’m confident I’ll keep weathering all the new changes my friendships have to offer.

*I am borrowing this term from an affirmation in Badass Resilience: Black and Brown Femme Survivor Love and Desire Affirmations by Leah Lakshmi Piepzna-Samarasinha and Keisha Williams.