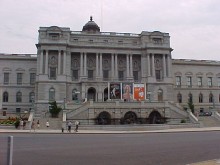 A gay man has charged in a lawsuit filed on Friday that he was fired in April from his job at the Library of Congress after being harassed and humiliated for more than a year by a supervisor who repeatedly quoted biblical passages condemning homosexuality.

The lawsuit, filed in U.S. District Court for the District of Columbia, charges that management analyst Peter TerVeer, 30, suffered employment discrimination based on his gender, gender stereotyping and his religious beliefs in violation of Title VII of the U.S. Civil Rights Act of 1964.

The lawsuit charges that his supervisor John Mech and library official Nicholas Christopher, Mech’s immediate supervisor, further violated Title VII by retaliating against TerVeer when he attempted to challenge their actions in an internal library complaint.