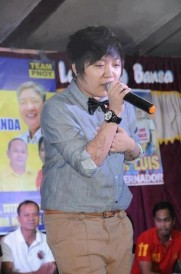 About a year ago, Filipina superstar (and former “Glee” phenomenon) Charice got herself a trendy tomboy haircut and an androgynous new wardrobe, and tabloids in the Philippines lost their minds. Last week speculation about her sexuality reached fever pitch, so over the weekend, Charice sat down with Boy Abunda on the celebrity talk show “The Buzz” and beautifully, bravely confirmed that yes, she is a lesbian.