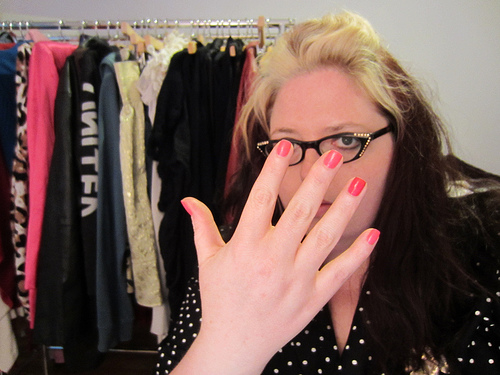 Solid red on both hands. Switch.

One of the things I love to do with my blog is help my dear readers learn how to see Femmes in the wild. I also like to help folks communicate desire. I also hope everyone reading this blog gets as laid as they want to, and if that is very laid it is helpful to know how to communicate desire. There’s this trend happening amongst Femmes that I want to hip y’all to. In order to encourage you to follow it if that is your calling and, more importantly, look out for so you can see what is being subtly communicated to you!

Okay, first of all, let’s review the hanky code for those of you who are living under a gay rock and have not been peeking out from behind it. The hanky code is a way of visually indicating sexual and/or kink desires to other folks without having to introduce yourself. Like, “Hi, I’m Bevin. I like biting.” Way less smooth than just saying, “Hi, I’m Bevin,” while throwing a 2-3 second lingering eye contact the way I try to do when I am being my most Femme predator self. A houndstooth hanky delicately slipped into the back left pocket tells all without having to put words to it, leaving your words to do other things.

Here’s a great synopsis of the very vast hanky code from the awesome blog Flagging Opinicus Rampant. I also highly recommend a read of that blog’s about page for a more feminist read on the hanky code, and I am highlighting this quote from their about page for the good basic reminders of what flagging does and does not do:

Basic Rules of Flagging
Flagging is not consent.
Flagging means being cool with being propositioned, being rejected, and having the capacity to reject.
Flagging is pan gender (you can’t assume someone’s junk from a flag).
There are no anti-flags.
Flagging is slut pride.

Flagging is great because it’s a pro-active “this is what I like.” It keeps things positive. Also, it’s hard to communicate from a hanky that you’re into doing a certain act only under certain circumstances, like I’m houndstooth often but I really have to be super attracted to someone in order to bite. But since biting is only some people’s thing it is nice to know when that compatibility exists. 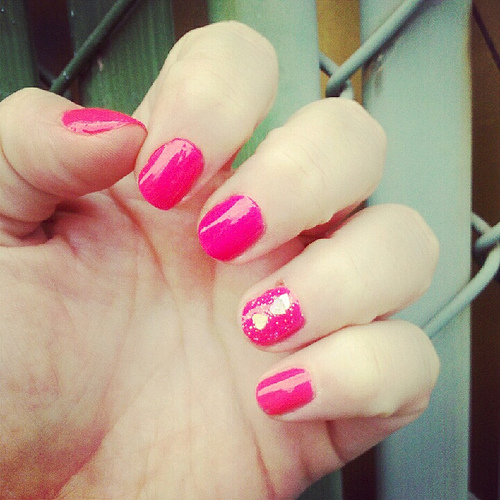 Me, flagging wild heart: switch (on both hands).

Anyway, onto the trend. Flagging with nailpolish!! Usually an accent finger on the corresponding hand. I love it!

Hankies are a great accessory and the fact that they can communicate desire is wonderful. I know some masculine spectrum folks who flag literally every day.

As a Femme it can be really hard to play the hanky game. I used to use my bra strap sometimes, like tuck a hot pink hanky in the back so it flapped around, letting everyone know I was both into a certain activity and also prepared in case someone needed a hanky.

I gave up flagging on my bra strap or purse strap awhile ago, but I still carry a vintage hanky with me wherever I go because they are endlessly useful. Summertime when you get a little sweaty (I mean “glowing”) after walking somewhere in the humidity. At the beach when I inevitably get sunscreen in my eyes. At the movies when I cry. On the subway when I accidentally listen to the saddest Lucinda Williams song and cry. When a friend tells a story and I cry. When another friend starts crying and I have a way to be chivalrous and nurturing. 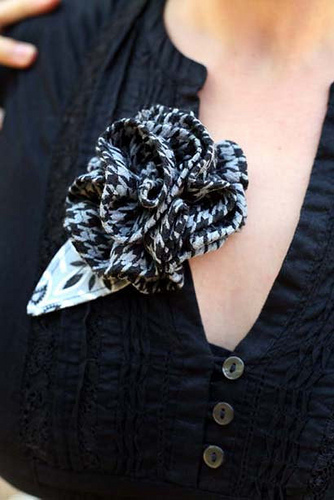 You custom order the rosette and leaf in whatever colors you want to flag with, pin it to your lapel or boot or clip it into your hair on the correct side and voila. Great for dandies and Femmes or Femme Dandies. But it’s twenty bucks and not as endlessly versatile as nail polish.

If you are a nail polish oriented Femme, as I am, it is likely you have a pretty big pile of nail polish in your fleet. Sinful

nail polishes are cheap at Target and basically span the rainbow. I also really like Sally Hansen Xtreme Wear

(that color is mint green, great on the left for Mommy tops). Also Nail Strips

There is a whole Tumblr dedicated to Femme Flagging, with a forum for fleshing out new additions to the hanky code. Lots of folks have been doing one finger on one hand for the flag, but others have been doing two (or three) “fucking fingers” as the flag. 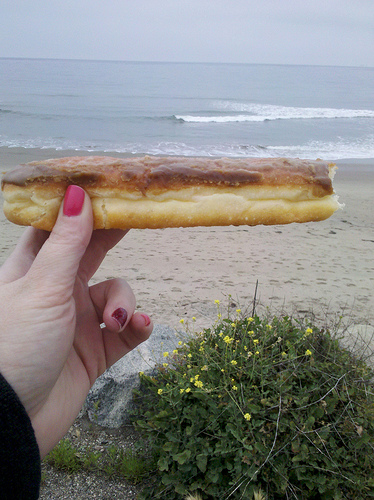 Flagging “glitter fist” which is basically my sexuality in a nutshell.

Cruise that tumblr! You’ll see so many different flags and femmespiration for it. I think the best part of the Femme diaspora is that there are truly millions of ways to do Femme, so because of that, there are infinite creative ways to use nail polish to flag. Also learning how to see Femmes is a practice, get some training in on seeing what Femmes have to communicate in their own words.

Daddy top into other POCs.

I have been a fan of the accent finger for a long time, mostly because I love glitter polish but find the removal a hassle so it’s easier when it’s only on one finger. Thus, I tend to do an accent finger with glitter. But ever since Femme Flagging with nail polish has been trending my flags have been called out multiple places, including instagram and at parties, by other Femmes. It’s always really nice to be seen.

You may be wondering what’s the best way to call someone out on their flag? Here are a few guidelines:

1. Carry a hanky code around so you can decode what it might be. I think there are apps for this. A truly geeky ex-lover of mine had it laminated and gave me a copy. She was geeky in the hottest ways. Being geeky is sexy and it’s nice to say “Are you flagging red on the right?” knowing what the answer to that flag is.

2. Ask the Femme. “Hey. Are you Femme flagging with that manicure? What does that say?”

3. Ask the Femme. “Hey, I haven’t seen that color in awhile, what does that mean?” 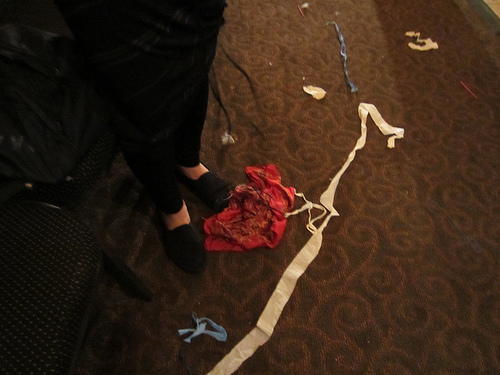 4. Don’t yuck someone’s yum. If you determine the answer to not be your thing, it’s cool. Just say, “Wow, that’s interesting/cool/it looks pretty.” And remember, just because someone is flagging it doesn’t mean they’re trying to get it in with you.

5. Be open to conversation. The best part about flagging is the conversation starter it can be. It’s really sexy to be able to flirt through some flags you’re into. “I’m generally into light blue but always into light pink and grey flannel,” is a hot text.

So, anyway, keep your eyes peeled! Get creative! Express your desires!

Bevin Branlandingham is your femmecee at QueerFatFemme where she chronicles the relentless pursuit of her joy.