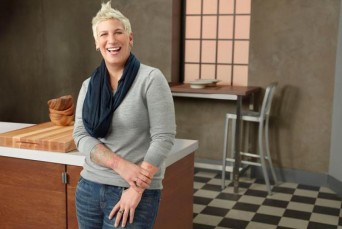 Celebrity chef Michele Ragussis is perhaps best known for her runner-up performance on season eight of “Food Network Star” on the Food Network. Her experience as Executive Chef at the Pearl Seafood Restaurant & Raw Bar in Rockland propelled Ragussis to a final four finish on the show and had lesbians everywhere salivating – about her cooking, of course.

These days Ragussis’ career is booming with an upcoming appearance slated for NBC’s new summer show “Food Fighters” and a stint as judge on the Food Network’s “Beat Bobby Flay” which is scheduled to debut in March. Ragussis is also working on a line of gourmet butters which are sure to put a sizzle in every lesbian’s sauté pan.

In between meals, Ragussis agreed to play along with us for a Fast 5.

1. Tell us one thing about you that most people probably don’t know, but you’re willing to share.

I’m really a softie even though I look tough.

2. If you could wake up tomorrow with one talent or skill you don’t presently have, what would you want that to be?

I’d like to have the talent to be a tattoo artist.

3. Finish this sentence: “I think the key to being happy is…”

I think the key is in truly knowing who you are.

4. If you had to give up one of the following for an entire year, which would you choose to live without: cell phone, television, hair products or chocolate?

(Given your profession, we’ll let it count, Michele.)

Keep up with Ragussis at her “Chef on a Pier” blog or find her on Facebook and Twitter.