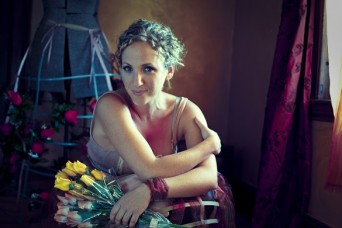 “Natalia’s voice could send an orchid into bloom while her guitar playing can open a beer bottle with its teeth.” – New Yorker

Gee, how can I even begin to describe Natalia Zukerman‘s musical style any better than that? I can’t, so I’ll just tell you a little bit about her and encourage you to check out the multi-talented artist for yourself. You can thank me later.

The daughter of violist/conductor Pinchas Zukerman and flutist/writer Eugenia Zukerman, and the sister of opera singer Arianna Zukerman, Natalia found her sound in other strings — those on slide guitar, lap steel and dobro. Her music — a fusion of blues, jazz, bluegrass and folk — was influenced by varied performers, including Ma Rainey, Memphis Minnie, Bonnie Raitt, Erika Luckett, Joni Mitchell, Rickie Lee Jones and Ani DiFranco.

Currently, Zukerman is working on her seventh studio album “Come Thief, Come Fire,” and has launched a pledge campaign to help fund promotion and touring to support the release. The campaign joins Zukerman’s musical and painting talents, offering those who pledge an opportunity to receive autographed prints of Zukerman’s work or even a commissioned mural.

Zukerman put down the stringed instruments and paint brushes long enough to play along with our Fast 5 this week.

1. If you had to give up one of the following for an entire year, which would you choose to live without: cell phone, television, hair products or chocolate?

Does Netflix count? I actually haven’t had a TV since college but I sure do watch the internet. If I gave up hair products, we’d all suffer from the glory that would be my ‘fro. On second thought, I guess that could be a good thing!

2. What’s the maximum number of cats you’d feel comfortable owning before worrying that the neighbors were starting to whisper, “There goes the cat lady?”

I think the more pertinent question is how many lint roller/hair removers would I be allowed to own? No one needs to know about my 100 cats.

Kinda both. But I love the early morning so much that I’ve had to give up some of the night owl when I’m not on the road.

Anything home cooked is my favorite.

5. If you could have one super power, what would you want it to be and why?

Teleportation! Sure would make touring easier!