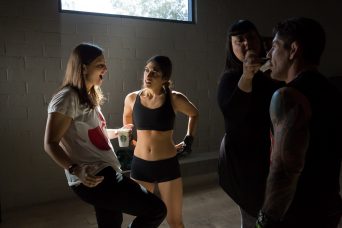 The Palestinian-American filmmaker tells the experience of what it feels like to immigrate from your home to a new place you’re trying to fit into, especially in today’s cultural and political climate. Selbak — a triple-minority in the filmmaking world, representing the queer, the Muslim-American, and the female — addresses the central themes of identity, racism, homosexuality and fear. Themes that are very present in our daily lives making headlines.

CHOKE tells the story of a successful MMA champion who hides her refugee identity from her small American town, and the world. Sara and her family are Muslim refugees who’ve escaped the vicious war in Syria and flee to the Unites States, where she fights for a new life in the brutal sport of mix martial arts. Directed by Sundance 2017 Filmmaker Rolla Selbak, it stars Jessica Damouni (Salam), Allison King (Baby Driver) and Victor Davila aka “master VIC” (MMA fighter & commentator for the UFC).

1. Do you have any phobias? (Please enumerate with embarrassing details.)
I’m mortified of flying. I look around and I’m like “Um, isn’t anyone else freaking out about this? Really? Am I the only one who thinks sitting in a chair 40,000 feet in the air strapped in by a thin little belt is insane? Really??”

2. What song can you not get enough of right now?
The Drake Scorpion album in its entirety. Don’t at me.

3. Which celebrity would render you totally star struck if you were to meet him/her?
Queen Bey! I legit almost fainted in my seat at her concert last year.

4. What would be your best piece of relationship advice?
Always get extra fries. Even if she says she’s not hungry.

5. If you could wake up tomorrow with one talent or skill you don’t presently have, what would you want that to be?
To perform magic, David Blaine style.

Learn more about Rolla and Choke.