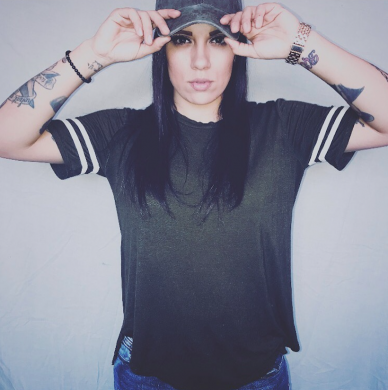 Eden Entertainment Group artist, Kat Florek, also formerly known as the “lusty loud mouth” on the reality TV show “The Bad Girls Club” (Season 14), has been popping in and out of the LGBT community hosting some of the hottest lesbian parties in her hometown of Chicago and coast to coast!

Many of her followers were truly inspired by the way she held herself while filming “The Bad Girls Club” and have since reached out, writing her for advice about their everyday lives. Most recently she has become an athlete entertainer, representing the Bikini & Boxing Association. You can also find her cameoing on hit shows, such as “Empire,” “Chicago PD,” “Chicago Med,” and “Chicago Fire;” proving to her followers that this Bad Girl is more than getting rowdy and acting wild.

Window or aisle seat on airplane?
Window, of course, I love the scenic route.

Early bird or night owl?
Honestly, it could be either or I LOVE waking up early and eating breakfast and grabbing my coffee or I can stay up late and be at the club lol.

If you could have a superpower what would it be and why?
I would love to be able to be invincible not to confuse with invisibility, but to have the power to be invincible. I could live forever, since life it too short anyways.

If they started to offer free trips to the moon would you go and why?
Probably NOT because I imagine it would be cold and lonely, but I do know of a few people I wouldn’t mind sending to the moon forever. Ha ha.

What song can you not get enough of right now?
DGAF by Dua Lipa. Check it out. It’s a bad ass jam.