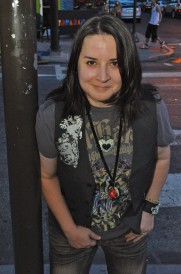 We all owe one of comedian Sandra Valls’ unnamed ex-girlfriends a sincere “thank you.” Why is that, you ask? Well, some time ago, said ex signed Valls up for a stand-up comedy lesson as an early Christmas present — in effect, giving us all the gift that is Valls’ intelligent, high-energy, brash brand of comedy.

Though the relationship didn’t last, the comedy lesson was well-learned as Valls went on to enjoy a career in which she has appeared in two Showtime hit comedy specials, “The Latin Divas of Comedy” and “Pride: LGBT Comedy Slam!,” been named one of Curve magazine’s Top 10 funniest lesbian comics and, perhaps most enviably, shared the stage with the gorgeous Eva Longoria at the HBO Comedy Festival.

Valls tours regularly with the Latin Divas and Queer Queens of Qomedy and recently wrapped up a stint at the week-long GirlSplash in Provincetown, Massachusetts, but amidst her busy tour schedule she still finds time to give back to the community. Valls volunteers for and produces comedy shows for various causes including benefits/fundraisers for AIDS, sobriety, domestic violence and LGBT rights and was honored in her hometown of Laredo with the International Woman’s Day Award for being a trailblazer and empowering women.

Valls will soon be headed to Michfest, but gladly played along with us in this week’s Fast 5.

Bette Midler. I was very young when I snuck around and watched her HBO Special “Bette Midler Live At Last.” That’s when I knew I wanted to have a career like hers, sans the mermaid outfit, of course.

“Wild Heart” by Stevie Nicks. I love Stevie Nicks! (Editor’s Note: Check out Sandra’s rendition of the tune in the video below — she can sing!)

I bought a Farrah Fawcett t-shirt.

4. Window or aisle seat on the airplane?

Actually it’s the middle seat. I love to be sandwiched between strangers. Feels safe. Oh, especially wedged between large men in short shorts and flip flops that smell like cigarettes. The men — not the flip flops.

5. Tell us one thing about you that most people probably don’t know, but you’re willing to share.

I sleep with a stuffed owl named Owly.