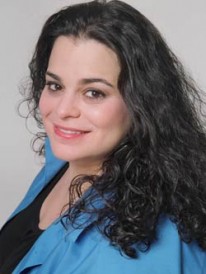 Have you ever truly laughed so hard and so long that your cheek muscles ached? I have — and it was at one of comedian Jessica Kirson’s shows.

I had the opportunity to witness the controlled chaos that is a Jessica Kirson set during a Queer Queens of Qomedy tour stop several years ago and have continued to rave about the high-energy, no-holds-barred comic ever since.

Kirson traces her love of comedy to old school influences like “I Love Lucy,” Jerry Lewis, “The Carol Burnett Show” and “Saturday Night Live,” and has always loved making others laugh. Torn between a career as a DJ or comedian, the latter won out when Kirson took a comedy class in 1998.

Now far removed from her days performing at delis, laundromats and the local Krispy Kreme, Kirson is a regular at every major comedy venue in New York City, including the Gotham Comedy Club, Laugh Factory, Caroline’s, and the Improv.

Kirson has also appeared on a number of television shows, including “The Tonight Show with Jay Leno,” “Last Comic Standing,” Comedy Central’s “Premium Blend” and “The View.” She also has a one hour special on the Logo Channel called “My Cookie’s Gone” and has appeared on “The Joy Behar Show” on CNN-HLN numerous times. She just made her big screen debut in Nick Cannon’s “School Dance” with Jim Breuer and George Lopez.

Kirson was gracious enough to play along with our Fast 5 this week.

I would have to say Lucille Ball. She had incredible talent. She was original and always stayed true to herself. She was also an incredible business woman

“Stay with Me” by, Sam Smith

I am in a movie that just came out, “School Dance,” written and directed by Nick Cannon, and I just filmed a cameo in Amy Schumer’s new film, “Trainwreck.”

4. Do you have any phobias?

Yes, I am filled with fear. My biggest one is rats. I am deathly afraid of rats.

5. Window or aisle seat on the airplane?

Window, so that I can ponder my life choices and cry in private. I hate the aisle. I constantly get knocked into.