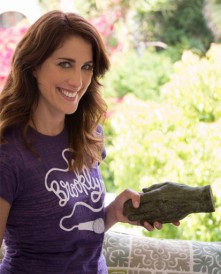 Most of the world was introduced to comedian Erin Foley back in 2000 when she appeared in the iconic Cameron Crowe film “Almost Famous.” My first introduction, however, came seven years later via a Queer Queens of Qomedy show in 2oo7 in which she shared the stage with Poppy Champlin and Jessica Kirson.

Since that time, I’ve become a huge fan of Foley’s intelligent brand of comedy, had the opportunity to film an interview with her and earned a healthy respect for her pool volleyball skills having witnessed her “take no prisoners,” ultra-competitive approach to guarding the net. Trust me, while you may want to be front and center at one of her shows, you do not want to be on the opposite side of a volleyball net when Foley’s in the pool.

(Most) kidding aside, Foley is an accomplished actress and comedian, having appeared on “Chelsea Lately,” “Curb Your Enthusiasm,” NBC’s “Go On” and debuting on “Conan” last fall.

A New York native now living in Los Angeles, Foley can be regularly seen at the Gotham Comedy Club, Caroline’s on Broadway, The Improv, The Laugh Factory and Stand Up New York. She’s currently touring to promote her new comedy CD “Lady with Pockets” available on iTunes and hosts a weekly podcast called “Sports Without Balls.” (Sadly, she’s a Yankees fan, though we find common ground in our mutual love of the New York football Giants.)

Fresh off an appearance at the Gay Games in Cleveland and in between her “Lady with Pockets” tour gigs, Foley found time to join our Fast 5 club.

2. If you could host a dinner party and invite any five people — past or present — to attend who would be on that guest list?

4. Which celebrity would render you totally star struck if you were to meet him/her?

If it was possible, Lucille Ball.

5. Do you have a hidden talent? Do tell!

I’m a really good dancer. Jazz hands and everything.