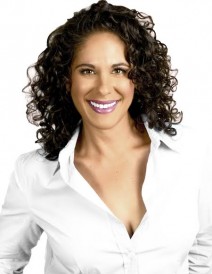 Albuquerque-born, Brooklyn-infused and Los Angeles-based comedian Dana Goldberg was destined for a career in comedy. The youngest child in a single-parent household featuring two gay children, Goldberg’s earliest review was from her Kindergarten teacher who proclaimed the youngster “the funniest five-year-year old I ever met.”

Now, over a decade into a comedy career which began in 2003, Goldberg continues to garner high praise from loftier authorities. In naming Goldberg one of the “Top Five Funniest Lesbians in America” Curve described her as “hot and hilarious … one of the brightest lights in a stellar comedy landscape.” The Los Angeles Times said Goldberg “is one of the greatest comics — sharp, funny, knows how to bob and weave with the audience.”

More than just a pretty face with the gift of comedic gab, Goldberg is a regular at HRC and AIDS awareness benefits and produces the annual Southwest Funny Fest in her hometown of Albuquerque, benefiting New Mexico AIDS Services. Shortly after the release of her latest comedy CD, “Crossing the Line” (autographed copies available here), I caught up with a then slightly under the weather Goldberg for this week’s Fast 5.

“Law and Order.” I have a bit of a cold right now, and I’m going on episode four in a row. I need an intervention. It’s Mariska Hargitay’s fault.

2. Which celebrity would render you totally star struck if you were to meet him/her?

Charlize Theron. I may be able to form sentences when she has longer hair, but there’s something about the fauxhawk she was sporting for a while. I think I might just stare at her.

3. Do you have a hidden talent? Do tell!

I have been playing the drums since I was eight years old. It’s been a few years since I’ve played seriously, but I like to pick up the sticks when someone has a set at their house.

Madonna before the fake accent.

5. What would be your best piece of relationship advice?

Find someone who makes you laugh everyday, and try not to take anything personally.