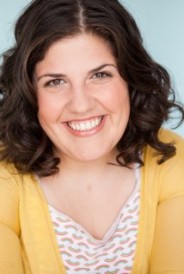 A native of Los Angeles, Rakefet Abergel is an accomplished actress and outspoken stand up comedian. One month after taking a stand up class, she won Best Comic and Best Overall Talent on the “Tyra Banks Show.” She appeared in the movie “Superbad” as the Tampon Girl and as Adam Sandler’s sister in “Just Go With It” and has been featured on television’s “New Girl,” “Shameless,” “My Name is Earl,” “ER” and “iCarly.”

Abergel performs stand up comedy all over L.A., including the World Famous Comedy Store and The Improv in Hollywood and can currently be seen in two hilarious webseries: “Breaking Fat” and “Addicts Anonymous.”

Lesbian.com debuts our new “Fast 5” feature with Abergel who bravely responded to our five random questions.

Melissa McCarthy — I stood in for her on “Gilmore Girls” and she is the nicest and funniest and most talented woman. She makes me believe that I can make it in this town no matter what I look like!

“Let Her Go” by Passenger. The words are just so poetic and the melody is so beautiful.

Text! I’m not above returning your voice mail with a text. I hate talking on the phone.

“Sister Wives” — I’m an avid hater of reality shows but I just can’t get enough of the Brown family. I mean who wants four wives?! That’s a lot of Valentines’ gifts.