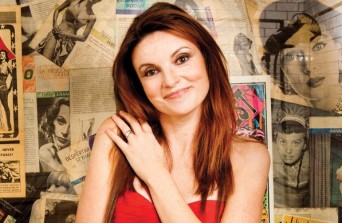 Ah, where does one begin in introducing actress and comedian Jackie Monahan?

Perhaps Esquire magazine, in naming Monahan best new comic, said it best : “She’s got the look of your friend’s hot, older sister, and the jokes of a deranged serial killer. She will kill you, and you will be smiling.”

Or maybe Roseanne Barr nailed it when she called Monahan a “fucking genius.”

In any event, Monahan is a force to be reckoned with both on stage and on the big screen. The Los Angeles-based comedian is setting the comedy stages of New York and LA on fire with her fearless brand of humor, performing at LA comedy hot spots such as The Comedy Store and The Improv.

On the big screen, Monahan starred as Zylar in 2011’s award-winning, hilarious comedy “Codependent Lesbian Space Alien Seeks Same.” The Sundance-selected, full-length feature film follows the adventures of lesbian space aliens on the planet Earth, and the story of the romance between Jane, a shy greeting card store employee, and Zoinx, the woman Jane does not realize is from outer-space.

Monahan’s latest project is “The Foxy Merkins,” another Sundance-featured film with an equally quirky plot line. Directed by Madeleine Olnek, who also wrote and directed “Codependent Lesbian Space Alien Seeks Same,” “The Foxy Merkins” follows two lesbian hookers as they wind their way through a world of bargain-hunting housewives and double-dealing conservative women. The female buddy film isn’t available yet, but you can sign up at GoWatchIt to receive alerts when you can see it. Or, if you’re lucky enough to be near Atlanta, you can catch the 9p.m., April 3, screening at the 2014 Atlanta Film Festival.

We managed to get Monahan to slow down briefly (aside from her comedy and acting gigs, I can tell you first-hand I’ve witnessed her boundless energy and whirling dervish-like energy on the dance floor) to answer a random Fast 5 for us.

1. If you could host a dinner party and invite any five people – past or present – to attend who would be on that guest list?

Right now I say mountains but ask me in ten minutes I will say beach.

3. Which individual has been your greatest professional influence?

4. Do you have any phobias?