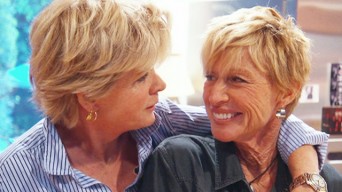 Meredith and Nancy (Via Oprah.com)

Baxter and Locke have been dating for seven years. In 2011, she told Oprah Winfrey that she didn’t know how coming out would affect her work and she was scared. Despite those trepidations, she described her relationship with Locke as the “healthiest” she’s ever had. The 66-year-old actress played Elyse Keaton on the popular 1980s sitcom. She was married three times before announcing she is gay in 2009.