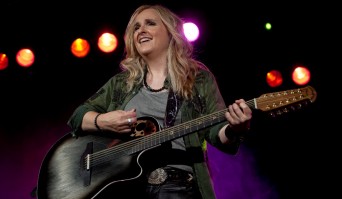 Melissa Etheridge reacted to the death of Fred Phelps earlier this week, posting the following on her website:

“I have heard today that the Reverend Fred Phelps has died. He had been a shadow, a propelling force on the gay rights movement for over 20 years. He was based in my home state of Kansas. He would come with his dozen or so followers from the Westboro Baptist Church, family members most, and they would picket my shows in Kansas City. Oh, their posters were frightening and ugly. I often wondered how anyone who went to church could actually state that God hates anything.

He showed up for my 20th Leavenworth High School Reunion. Once again, he and his followers had the same scary posters. I am glad I did not bring my children to that one.

Yet every time I saw him on the news picketing a funeral I knew he was testing the nerve of a nation. I knew pretty soon the people of America would think to themselves that his message had nothing to do with Christianity and certainly nothing to do with Jesus Christ. His signs were based on fear, on the damnation of souls and they were now being blocked by angels wings and larger signs of love and peace. More protesters would turn out to make sure that grieving families would be sheltered from the hateful signs than were church members holding them.

As I hear the news of Rev. Phelps passing I also hear that he had been excommunicated from his own church in the end because he had begun advocating for a gentler approach. I like to believe that as one begins the transition back to source, back to The Creator, one sees more love in everyone living on this planet, and inside themselves.

May you find peace, Reverend Phelps. With your passing, so passes the soul shattering fight for the hearts and minds of the American people over Gay Civil rights. In the end love is love. I will be sending loving thoughts for you and to your family and loved ones.

Ephesians 4:2 with all humility and gentleness, with patience, bearing with one another in love.