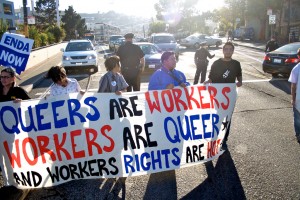 WASHINGTON — The Senate could vote on the Employment Non-Discrimination Act as soon as September, a Senate Democratic leadership aide told The Huffington Post on Thursday. The bill, which would ban workplace discrimination based on sexual orientation and gender identity, cleared the Senate Committee on Health, Education, Labor and Pensions in July. All Democrats on the committee voted for it, along with three Republicans: Sens. Mark Kirk (Ill.), Lisa Murkowski (Alaska) and Orrin Hatch (Utah). The Republicans who voted against it were Sens. Lamar Alexander (Tenn.), Mike Enzi (Wyo.), Richard Burr (N.C.), Johnny Isakson (Ga.), Rand Paul (Ky.), Pat Roberts (Kansas) and Tim Scott (S.C.).

ENDA has been introduced in several congressional sessions and has gotten some hearings, but hasn’t had a vote on the House or Senate floor since November 2007, when it passed the House, 235-184. The bill was introduced in this Congress by Rep. Jared Polis (D-Colo.) in the House and Sen. Jeff Merkley (D-Ore.) in the Senate.