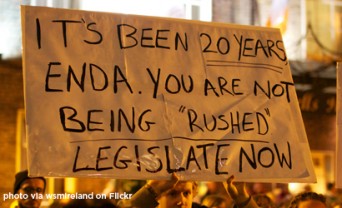 In a departure from previous public comments from the Obama administration, White House counselor John Podesta said on Friday an executive order barring LGBT discrimination among federal contractors is “under consideration.”

During an interview with Bloomberg News’ Al Hunt, Podesta made the remarks when asked if President Obama would issue a heavily sought-after executive order prohibiting federal contractors from discriminating on the basis of sexual orientation or gender identity.

“Well, what he said in the State of the Union was he was going to require federal contractors to pay a minimum wage of $10.10,” Podesta said. “The order that you’re talking about is under consideration at the White House. We’re looking at that.”