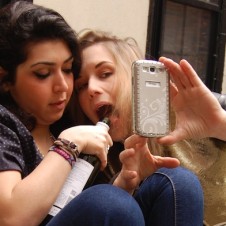 As most millennials know, webseries can be pretty hit or miss. Luckily for queer girls and their straight besties, the webseries “Karly and Alex” is hilarious, well written and beautifully produced.

The show centers around Alex (Ashley Elmi), an Iranian lesbian, and Karly (Audrey Claire), her straight BFF, and follows their adventures in Boston. They are narcissistic and codependent. Their relationship perfectly captures the intense platonic love that women in their early 20s share with their best friend in a way that the popular cable sitcom “Two Broke Girls” was never able to achieve.

The best part is that although Alex is gay, she’s not in love with or trying to sleep with Karly and she’s not struggling with her sexuality. Karly, for her part, doesn’t try to make out with Alex to get guys attention or worry about Karly being attracted to her. In fact, in the first episode, “The Herp,” Karly repeatedly shows Alex her vag and there’s never a question of it being sexual, which most queer women and their best friends can relate, too.

Katie Shannon, creator and executive producer, loosely based the series on herself and her straight BFF from college. She wanted to capture the dynamic between best friends of different sexual orientations because it’s not something that’s explored in media very often. However, it’s definitely a relationship combo that happens often in real life. Shannon loosely based the pair’s outrageous antics on her own experiences. This helps keeps the series grounded, despite it’s more outlandish moments.

Shannon also includes organic references to Alex’s Iranian heritage throughout the series, which is refreshing. It’s always great to have the diversity of our community reflected in queer media. It’s something that’s all too often forgotten about or swept under the rug.

To be fair, the webseries isn’t for the faint of heart. You have to find bad drug trips and sex toy mishaps funny in order to really enjoy “Karly and Alex.” But if you do, then grab your best straight friend and some popcorn and watch it now!

The first season of the webseries is five episodes and at about 10 minutes each, they go really quick, so space it out. Watch now on Karlyand Alex.com. If you love it, let the producers know that you want a second season by following them on Twitter or liking them on Facebook.