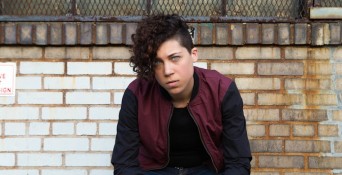 Kristen Ford knows no genre. Her new album “DINOSAUR” is an intelligent collection of songs encompassing reggae to pop to country to folk and everything in between. Recently, she took time to discuss “DINOSAUR,” her influences and her upcoming tour.

Who are your musical influences?

Perhaps I’ll move chronologically, as there are so many great artists it’s hard to choose! Blink 182 was the first band I fell in love with — music blasting, jumping around the room singing along with air guitar. I bought an electric later that year and started playing.

At an Ani Difranco concert when I was 15 or 16, I decided this was what I wanted to do for a living. She just had the whole audience in the palm of her hand — such power with a voice and an acoustic instrument. One woman. I had never experienced such a feeling.

Radiohead creates sonic textures and feelings I feel are unmatched anywhere. I do enjoy Phoenix. Audrey Ryan is a local Boston hero, a mentor and friend of mine. Recently, I discovered The Oh Hellos and Typhoon. I dig them both. Oh and the Beatles! They need some press bad.

Who would be a dream songwriter/band to collaborate with or tour alongside?

I would just die to open for Ani Difranco on a tour. I would love to have something produced or co-written by Jon Brion. It would be fun to do some co-writing with Kasey Musgraves, she’s really taking country music in a new direction.

How would you describe your music?

Indie Rock. Everyone seems to think I can’t pick a genre, which is true. I really love country, disco, EDM, folk, hip hop, reggae, distortion and rock n roll. I can’t stand it when a band launches into their live set and the first two songs sound exactly like all the other songs. I always want variety and to push the envelope musically in terms of what I can comprehend and what we can play as a band. For example, “El Camino” on the new album, we worked with Auto-Tune very obviously in the verses — sort of a nod to 2014 pop songs and hip hop today. On “Internet,” we wanted to make an electronic dance tune, working with live instruments and creating loops with super polished modern Tegan and Sara style harmonies. It was all very fresh and challenging. That’s why I play music, to be a child again and create and make mistakes and find the joy in it all.

Usually, it just pours out of me. I’ve got a moment and some space and the words and music happen with the guitar in my hand. Sometimes, I’m on my bike and have to pull over and sing into my phone and record the melody and try to piece it together with accompaniment later. I’ve also played with the same band for the past couple of years. They are very helpful. I’ll bring them a verse and a chorus and they’ll help with tempos or finding a good way to get from section to section. I have to trust them when they say “this is just like another song you wrote” and they have to trust me when I say “No, give me this feeling” or “Make it faster, dance bitches!”

What inspires your songs?

Life. I see so much in the world I want to talk about, I want to change, I want to understand.
I also know you can’t make anyone do anything they don’t decide on their own. When you call someone a faggot or say the N word, as a bi-racial lesbian, I’m very offended! Just saying “Hey!” doesn’t do anything. But you’ve got a song like “Zeda” that I wrote, and I’ve heard people tell me it’s made them cry or feel very intensely. That’s the power of music. I’m also inspired by my life, at my own ability to make a complete mess of things, and not see it coming. Music is my way to release and see myself out of it.

Is there a lyrical theme that tied “DINOSAUR” together?

I would say “DINOSAUR” is about my journey to Wyoming and back last year. I learned so much and got out of my comfort zone, my little Boston hipster, liberal bubble. It’s about falling in love and struggling to make your living and learning to laugh through it as you make your way in this world.

How does “DINOSAUR” differ from “The Grindstone”?

“DINOSAUR” was a very different project from “The Grindstone.” I’m older now with at least 400 more shows under my belt. I worked with producer Jesse Ciarmataro on “DINOSAUR,” where “The Grindstone” was self produced. “The Grindstone” was made in a homemade studio, mixed in Los Angeles where I made edits across the country, and on a fraction of the budget we had on “DINOSAUR.” I felt the funds we had raised through a grant and Kickstarter donations, made it possible for me to work in the studio of my dreams, be very involved in the mixing process, and work with great people every step of the way. I hope this will be the project to put me on the map in a bigger way. I’m very proud of it, proud enough to move into a van, quit my three jobs and tour full time to promote it.

A lot of indie artists are opposed to giving away music for free, but you’ve given away entire albums. What is your reasoning for giving it away?

I may be changing the free music format soon, at least on the new stuff. However, less and less people are paying for media. TV shows, music, you can find it for free. If you stream my music on Spotify, I need 1,000,000 streams to get $400. So far I think I’ve been paid 30 cents over the past couple years from Spotify. If you rip it from YouTube the sound quality will be terrible. I’d rather you download off bandcamp free of charge, share your email address, then we can connect on a tour, or on my next crowdfunding campaign. I would rather gain a fan and lose out on a couple of dollars on an album that’s already paid for, then hoard an album and have no one hear it.

What is your favorite song to perform? Why?

I like “Ah Ooh Ooh” because it’s so fun and dancey. At Northampton Pride, we had a sign language interpreter, and it was fun watching the sign for “Ah Ooh Ooh,” which is a made up sound.

What is coming up for the remainder of 2014?

Living in a van, touring the country. Notably, I’ll be playing on the mainstage at National Women’s Music Festival in Wisconsin on June 26. I’ll be experiencing Michigan Womyn’s Festival as sound crew, which should be a trip. Then we’re headed back to the dude ranch in Wyoming. This should be a busy summer and super fun fall. If the van is still running, we plan to head to the south and west coast in early 2015. You can follow the travels of me and my girlfriend on our website.

For more information about Kristen Ford, check out her website.