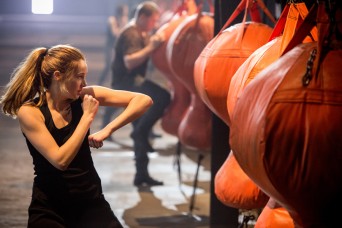 The highly anticipated film “Divergent” hits theaters nationwide this weekend. Based on the best-selling book by Veronica Roth, “Divergent” is the first film in the latest science-fiction trilogy from Summit Entertainment (co-producers of the “Twilight” series).

The story takes place in a futuristic city (modeled after Chicago) populated by a dystopic society in which citizens are divided into factions based on one of five established virtues: selflessness (Abnegation), knowledge-seeking, (Erudite), bravery (Dauntless), peace-seeking (Amity) and honesty (Candor). While the segregation peoples into seemingly compatible sub-societies may at first seem appealing, this divisive civilization lacking in culture, art, fashion, music and individuality is ripe for a revolution as the various factions stray from the integrity of their founding manifestos.

“Divergent” is loaded with strong female characters. The beautiful Shailene Woodley (“The Descendants”) is in the lead as Tris, a young non-conformist (otherwise known as a “divergent”) who is forced to choose between her birthright faction (Abnegation) and her nature (Dauntless). Ashley Judd portrays Tris’ mother, Natalie, who we learn is key to Tris’ survival once her choice has been made. Kate Winslet is cast as Jeanine, the callous leader of “Divergent’s” post-apocalyptic hell who despises free thinkers. (I think we’ve all known a Janine or two.)

While many comparisons are being drawn in the press to the “Hunger Games,” I found “Divergent” more relatable as it presents with several themes relevant to our present society.

What happens if unemployment is what ultimately leads our society to hit rock bottom? “Divergent” provokes consideration of a future world in which our careers, our families and even our lives are dictated by “corporate factions” to which individuals are assigned based solely on their defined skill. If you find this concept frightening, you’ll understand the emotion evoked by the film’s premise.

Director Neil Burger does good job directing a multitude of young, new faces and introducing them to the big screen. Burger complements the fresh faces with more seasoned actors who lend an anchoring presence to the film’s story. Action-packed with heart-stopping moments, “Divergent” will have you screaming that famous line from John Waters’ film “Hairspray” — “Integration now, segregation never!”