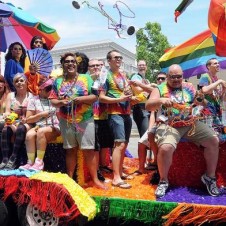 If you’ve ever wanted to meet a bearded bear of a rugged country singer, a band of banjo-playing crust-punk baby dykes, or a troupe of honkytonk drag queens fanning themselves with vinyl records in the June heat, you should have been at Pride Week in Charleston, West Virginia.

Despite the state’s fiercely conservative nature, celebrations of LGBT culture could be found thanks to community organizations such as Rainbow Pride of West Virginia. Some critics have argued that Pride has become obsolete in today’s post-gay cultural atmosphere, even venturing to say that Pride is setting the queer community back, and that we’d gain more from assimilating into the mainstream culture than from behaving like a flashy separatist group. I humbly disagree.