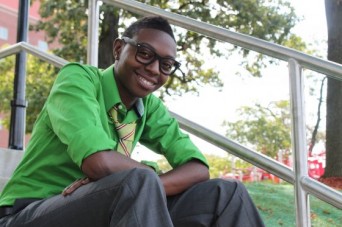 During her Season 3 run on “The Voice,” De’Borah Garner charmed many a queer gal with her plastic specs, powerful vocals and her pledge to stay true to herself. The Chicago native released a debut single last March. “Coming Out Looking Good” tells of her experiences with anti-gay church groups and her rebirth as an openly lesbian artist. The song’s title is derived from a sermon written by her father; it became a chant that Garner would use to keep going when religious homophobia was about to axe her singing career. “‘Coming Out Looking Good’ means regardless of my situation, I’m going to succeed,” Garner says. She laughs a bit when she describes her unique song, which bows to no rules or strict musical format. “It’s more [like] I’m just talking to you–I’m letting you know what has happened, and then what’s happening right now. I needed the world to realize that, yeah, I’m not trying to blend in into this industry, no way, no how.”

Garner’s single is rich with her infectious positivity. She calls her music “soulful rock,” meaning: “I’m singing from within, but I’m always rockin’ out. I can’t help but rock out in any song I sing, whether it’s hip-hop, R&B, pop, rock, alternative, gospel.” The self-described “misfit” wants to encourage the colorfulness of everyone else in the world. She says that young misfits need to try to out-live their difficult circumstances, to become greater than their own problems. As a black gay woman, she doesn’t think much of mainstream social acceptance. “Women, we had to fight just to vote. Slavery had to be abolished. Now, I’m a lesbian. I’m three walking contradictions. So, I refuse to look for approval at this point! I’m gonna make [my own] approval.”