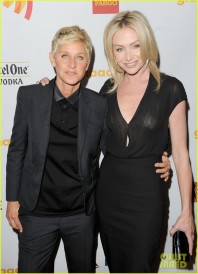 Even stars like Portia de Rossi can have an identity crisis.

The “Arrested Development” star, who celebrated her fifth year anniversary in August with Ellen DeGeneres, admitted that before she met her future wife, she was ready to live life unemotionally.

“There was nobody that I could say, ‘I could date her and I want to be like her.’ I just kind of thought I don’t want to live like this. I don’t have to, I don’t need to, I just shut down the emotional life,” de Rossi said.