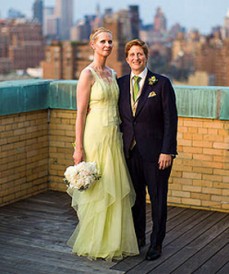 “Don’t think of me as a bride. Think of me as a grown-up woman who needs a dress to get married in.” Those were Cynthia Nixon’s only specifications to designer Carolina Herrera as she prepared for her May 27 wedding to education activist Christine Marinoni. The “Sex and the City” star spoke exclusively to Elle magazine’s Amanda Fitzsimmons about selecting her pale-green gown for the New York ceremony.

“I knew I wanted Carolina Herrera, because I’ve had so much luck wearing them in the past and they know my body so well,” Nixon, 46, reveals. “With a same-sex marriage, it’s different. There isn’t the archetype of the demure bride, the strapping groom, and the big ol’ white dress.” Still, the designer had her own ideas when it came to Nixon’s gown: “She said, ‘You need to get a dress with a capital D. So even if it’s not poufy or white, there’s a certain level of ceremony.'”