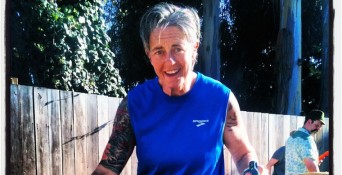 Dear readers,
Since Conscious Girlfriend put out the call for “worst breakup stories,” we’ve heard from many of you! It’s inspiring to read how you’ve turned devastation into growth, learning and joy. Please feel free to send your own breakup story with us: ruth@consciousgirlfriend.com.

Now, read on for this powerhouse story by Nicole Ditz, www.holisticdepththerapy.com.

I was a much younger woman, 27 years old, presumably straight, and married to a closeted gay man whom I met at age 18 and who helped to extricate me from a highly dysfunctional family of origin.
I was a grad student in a counseling psychology program and so was she.

She was butch, 21 years my senior, completely other from me in every possible way, except for being exceptionally bright and psychologically damaged by trauma. I was matched up to do a project with her.
I was nervous, skittish at the thought of going to a butch lesbian’s cabin — yes, the proverbial log cabin in the woods, with chainsaws in the yard, and lesbian feminist iconography hanging from every rusting nail head.

Yes, she appeared surprisingly attractive in her own environment, stocky and handsome with a daredevil grin, blue jeans and a purple “fuck the patriarchy” T-shirt-y get up.

I was primed for this encounter: Having been immersed in feminist studies and women’s spirituality for the past couple of years, moving from interest in supporting the men’s movement and even being a part of a men’s circle in Boston (long story—I drew men to me easily for some of the right, and many of the wrong, reasons), to women’s and feminist and goddess groups and books: Starhawk, Adrienne Rich, May Sarton, Kate Millet, Jean Baker Miller and so on.

But I definitely was not lesbian, just feminist, although I had purchased a pair of tie up black combat boots worn beneath tight denim shorts given to me by a gay man I was deeply in love with (no not the one I married).

‘Lesbian’ sounded strange like a sideshow in a circus. I was just a former daughter of patriarchy, wearing my outfits extra tight to attract the boys, but I began to find most men highly predictable, one dimensional and utterly boring.

Confusion. Patriarchy. And its opposite or so I thought. A strange older lesbian dyke who lived bra-less in a rather spooky cabin in the woods and called herself a witch with a devil-may-care glint in her eye.

It made for a good story to tell my girlfriends. Until it was no longer a tall tale, but a fleshed out reality, set to music by Ferron and Chris Williamson and Cheryl Wheeler, with me dressed in her flannels and she drinking Scottish Whiskey and me begging to be “held” and then dancing and then gazing and then falling to my knees as her black cat spun spiral 8’s around our fused fecund tangled heap on the floor.

And then my world was wrung inside out and I was trying to juggle grad school, internships and an early psychotherapy private practice and weekends at both her cabins, driving in a tin can of a car across three different states.

And obsession. And merging. And poetry. And Michigan. And kissing in the summer rain ensconced in crowds of half naked women.

She was bright and nurturing and manipulative. I was a vision of her younger self, before her motorcycle accident. She was the best and worst of every longed for woman and man rolled into one temptress and torturer.

She grew less nurturing and more and more controlling with interspersed moments of deep attunement and compassion and love followed by rage and criticism and coldness.

The old, sad story of intermittent reinforcement and a young woman who believed she could fix fundamental characterological problems by learning how to hold this tool properly or string the right combination of words together to unlock the jigsaw puzzle of another’s heart. The pieces just wouldn’t fit seamlessly together no matter how hard I tried.

I was desperately emotionally needy, having been raised by two completely inept human beings who couldn’t handle emotions of any stripe.

I admired her, revered her, was besotted with her and would trade my sexuality and alluring female wares, hungry for any dime of attention she would spare me.

Plus she was a diehard lesbian feminist so could only have my best interests as a younger woman in mind. Right?

You know the answer, but I wasn’t ready to acknowledge fully what I knew until I had to do her impossible and escalating demands. Such as shoveling her quarter mile uphill driveway by myself at 5 am in the dark before a 10-hour work day?

The word “no” was birthed, a new language in the dark womb of my mouth.

I leaned into my knowledge as a budding psychotherapist, my understanding of personality disorders and their subtleties, as well as abuse cycles. I had worked briefly in the field of domestic violence.
Funny how different it seems when the blows are not fists but words and shrewd control tactics.
I managed to stay away for a week. then two then months, then a year. I worked on my insecure attachment issues, trauma, and emotional deficits due to my difficult childhood.

I refused her request to meet with me in a public place, telling her I was too vulnerable and needed to solidify myself.

I did solidify myself, step by step. Believe me, it was achingly hard. I made small clay sculptures in dream groups of my heart hanging out of my chest looking still to be held by her large, calloused hands.

Fast Forward: I serendipitously met my now female spouse of 17 years, one-two years after the closing of that story.

There were challenges here with this new woman, but not the same type or degree. They were workable.
We have established a good, solid and upstanding life with two amazing careers, two homes in two states, and two beloved dogs.

But I knew I could not be around that original woman anymore than a drug addict should be living in an opium den.

I “learned to love with all my intelligence” as Adrienne Rich, in other words, once wrote.

It was muscular and sweaty: journaling, reading, workshops, therapy, deep self-reflection, working on building a foundation inside myself rather than in another. I took back my pulpy heart and stitched it up securely in my own small but sturdy chest. I no longer led with my emotions but with my growing and expanding ‘wisely discerning mind.’

I learned that passion and mature love are not the same animals. They may graze side by side in the same savannah and drink from the same trough, but they are not interchangeable.

I am thankful to myself that I learned to be my own answer and rescuer. Our power and responsibility for our own well being as precious individuals is our very birthright. Let us never hand that power over as adults to another human being. Let us use that power wisely and responsibly with compassion toward ourselves and toward others.

Blessed be to all my fellow journey women!

Visit Conscious Girlfriend to get your free copy of “The Five Keys to a Happy Lesbian Relationship!” and check out our amazing upcoming retreat, too!