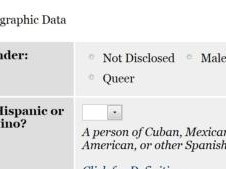 Job applicants seeking a position with Colorado College will find five options for a question about gender identity: not disclosed, male, female, transgender and queer.  The question for the Colorado Springs-based private liberal arts college is voluntary, but the inclusion of the word “queer” on the application made 66-year-old John Kichi of Pennsylvania very upset and even prompted him to file a complaint with Colorado Attorney General John Suthers’ office, adding that he’s been discriminated against because of his sexual orientation. “It’s totally from the Dark Ages,” he says.

Colorado College’s Office of Minority and International Students defines queer as “an umbrella term describing people who have a non-normative gender identity, sexual orientation, or sexual anatomy — includes lesbians, gay men, bisexual people, asexual people, transgender people, intersex people, etc.” At another college group, The Queer Initiative, at the University of Colorado at Boulder, queer is meant to be self-empowering.

What do you think you think about the transformation of words like “queer”?

Many feel it’s a progressive move intended to be inclusive. Others are afraid it will open up opportunities for discrimation. How do you feel about Colorado College’s choice to include more options than “male” and “female” for gender?