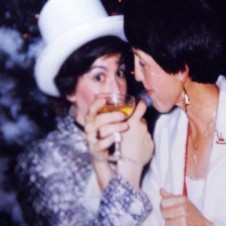 “Surviving the Silence: Love and Impossible Choices” is a new documentary about the 30-year relationship between Col. Patsy Thompson and activist Barbara Brass against the backdrop of Col. Grethe Cammermeyer’s dismissal from the National Guard. Thompson served on that commission, making a heart-wrenching decision to remain in the closet and continue the distinguished military career she loved.

Weathering intense, long-term separation as well as vigilantly working to evade detection, “Surviving the Silence” tells a story of enduring love and ultimate triumph for lesbians and gays in the military.

While Thompson elected to remain silent while she helmed the board that dismissed Cammermeyer, she framed the dismissal in such a way that Cammermeyer could take the issue before a federal court, which ultimately overturned the military ruling.

Decades later, Thompson and Cammermeyer discuss these impossible choices in “Surviving the Silence.”

Award-winning director and producer Cindy L. Abel of Atlantis Moon Productions is leading the project, which launched a Kickstarter campaign for funding. Make a contribution.

Thompson and Brass shared the secrets to their long-term success and elation at finally telling their story with Lesbian.com.

How did you and Col. Pat meet and fall in love? What would you say is the key to your longevity?

Barb: I was looking to meet other lesbians and went to a house party for women over 40. Though I was 30, I thought an older woman was just what I needed. Little did I know then how right I was.

Pat: Athletic ability was a “must have” on my list. I was immediately attracted to Barb and asked her to go running. There was just something that drew me to her. I knew I had to get to know her. That “knowing” is what helped us get through so many of the challenges. I always felt so fortunate that we found each other.

Barb: There were certainly inherent challenges, like a 20-year age difference. Different backgrounds: Pat was raised in rural North Carolina in a conservative family, I was raised in California by holocaust survivors. And different perspectives: I was a pacifist, wanting to be fully out, Pat was a military officer whose career demanded being in the closet.

Pat: We are so different in so many ways and yet have many of the same likes. We each enjoy many varied interests, so that keeps us interesting and interested. We spent years working together on our house and experiencing the joys of accomplishment. Both our joys and sorrows have ways of bringing us closer together.

Barb: We were committed to each other and to our relationship. We created a home — a sanctuary &#!51; where we could be ourselves. We had a secret code to communicate when our phone conversations could be listened to. We trusted each other to be true. And, our military-caused separations have added to the preciousness of our time together.

The film “Surviving the Silence” chronicles your love story against the backdrop of no gays in the military. What challenges did Col. Pat’s career present to your relationship? Why did you decide to share this story?

Pat: My career viability demanded that Barb be invisible to the government, so that set up far too many situations in which we had to make impossible choices. How could I choose between who I am and the work I was called to? How could Barb choose between being with me and openly working for equality? How could we be “together” yet be apart? These are impossible choices — neither is fulfilling — so we had to find a way to get the best we could out of every situation.

Barb: The hardship of being apart while Pat was serving at the Pentagon as the Chief Nurse of the Army Reserves National Guard or in the jungles of Panama was amplified by the anxiety of always wondering, did someone catch on to us? Will they report us? Were unknown investigations going on? The all-consuming drive to be closeted permeated our lives and kept us in a stranglehold of fear as well as an underlying subtle sense of shame.

Pat: And that’s why I love being able to tell our story. It puts a real face on the impact of laws. It also shares what was at stake and how much was required to earn the freedom to serve in the military and the right to marry the person one loves. Our stories are what we have to give the world to help bring humanity closer together.

The end of “Don’t Ask Don’t Tell” came post-Col. Pat’s military career, but what was it like to hear that it was over?

Pat: Initially, the DADT policy had offered a momentary glimmer of hope but it soon turned out to be just as bad as the previous policy. When it was overturned, I wasn’t sure if it was really over. It felt unbelievable, after all this time.

Barb: I thought, “Finally, no one would have to live through what we did!” Our country was moving in the right direction. I could see how moved Pat was as she got the phone call about the announcement.

What impact do you hope to make with this documentary?

Pat: Telling our story documents history. So little of what is taught in schools includes LGBT people. Even as laws are changing, young LGBT people and non-LGBT folks don’t really know how we have gotten to this moment in time.

Barb: “Surviving the Silence” tells our story — how love did, wonderfully, beat the many odds and survive despite the silence. And, it also reveals one of the most impossible choices Pat had to make: whether to preside over the board that would dismiss Colonel Grethe Cammermeyer from the military for being a lesbian. (Col. Cammermeyer’s experience was told in her book “Serving in Silence” and made into a 1995 television movie executive-produced by Barbra Streisand and starring Glenn Close.)

What was she to do? She could have come out and then there would have been two of them getting kicked out. She could’ve presided over the board, but not pushed for anything beyond the inevitable discharge so she could avoid any suspicion. Or she could fulfill her duty in a way that allowed Grethe the best possible defense. Pat was so brave, that she took steps that led to Grethe being able to get into federal court and being reinstated. I agree with Grethe when she says Pat is a hero. And now the world will finally learn about her courage — just one of the many reasons I love her.

What have you learned about yourselves in the process of making this film?

Pat: That we can still make more room in our busy schedules to accomplish things that are important to us.

Barb: Looking back over my life to gather information for the film has had a clarifying effect on my sense of purpose. So much of what I wanted my life to accomplish has begun and has taken a direction that I never imagined.

In looking back over your relationship in the making of this film, what do you wish you’d known then that you know now?

Pat: It might have been easier to endure the impossible choices placed in our way by the very government I was serving if I’d known we’d reach this place personally and as a country. But it’s finding a way to survive those choices that made Barb and me so strong as individuals and as a couple.

Barb: Some of my anxiety might have been reduced during those long separations, if I’d been able to glimpse into the future and see how we would weather all the storms of the past 30 years and still be as in love and loving as we are. But it’s the not knowing that made us work so hard to make the impossible possible, so it’s probably best we didn’t know.

Help “Surviving the Silence” make it to the silver screen by contributing to its Kickstarter campaign. Make a contribution