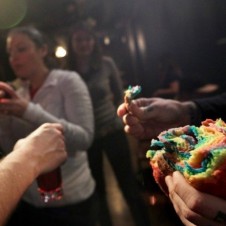 On May 14, Minnesota became the 12th state to sign gay marriage into law as Governor Mark Dayton signed its marriage equality bill and said “life, liberty and the pursuit of happiness should certainly include the right to marry the person you love.” Two days before, the Rev. Jay Bakker presided over the opening of Revolution Church in Minneapolis , which meets at Bryant Lake Bowl. Bakker had recently relocated with his wife to Minneapolis from New York City, where he started Revolution Church NYC, which continues to meet in a bar in Brooklyn.

To celebrate the first day of the church and in honor of the pending pro-LGBT legislation, a friend of Bakker’s, the theologian and Patheos blogger Tony Jones, along with his photographer wife Courtney Perry and daughter Lilly, baked a special rainbow-colored communion bread to be shared at the church service.