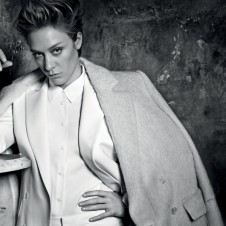 One of the shots from Absolut Elyxr’s new ad campaign.

If anyone is the ultimate lesbian tease, it is Chloe Sevigny. The actress has played LGBT characters several times throughout her career, and done just as many photoshoots wearing queer gear. Her new campaign for Absolut Elyxr (“a new super-premium vodka”) is no different. It was unveiled in New York this week with Chloe herself in attendance.