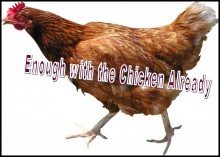 Can we please stop making the right of equality on par with the tastiness of a crispy chicken sandwich?? The media’s focus on the CEO of a chicken fast food restaurant speaking against same-sex marriage is the product of a grand corporate PR campaign. The company has always had a conservative stance so the CEO’s comments should not be shocking. What should shock us, however, is that the election is only three months away and we are focusing on chicken and not on the real issue of equality.

The focus of those who believe in equality for all should be on the election and supporting the candidates who have stood up for fairness and what is right. The Democratic Party will include a plank backing gay marriage in its official platform at its convention. President Obama announced his support for marriage equality. And in my home state of Washington, voters are being asked to approve Referendum 74. A failure to approve this would rescind the Marriage Equality Law signed by Governor Christine Gregoire in February which makes Washington State the 7th state to achieve marriage equality in the country. We should be focused on this, not a fast food chain.