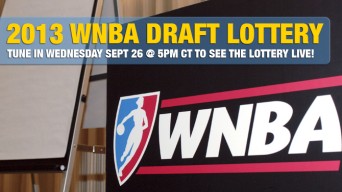 BY THE SEATTLE LESBIAN

The Chicago Sky, Phoenix Mercury, Tulsa Shock, and Washington Mystics will participate in the 2013 WNBA Draft Lottery today. The winner of the league’s 12th annual Lottery will secure the top pick in the 2103 Draft, which will be conducted next April.

ESPN will present the 2013 WNBA Draft Lottery — to be held for the first time at ESPN’s studios in Bristol, Conn. — live during the 6 pm ET edition of SportsCenter.