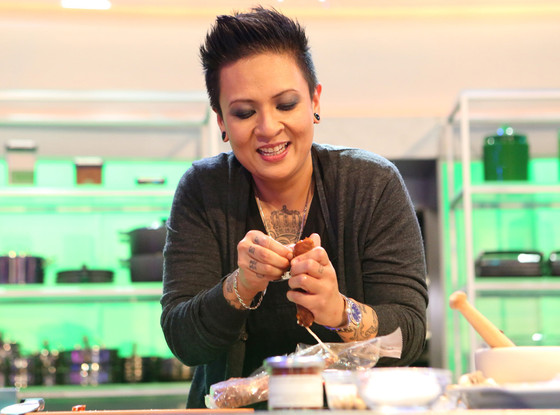 Finding success personally and professionally has allowed Khristianne Uy, better known simply as Chef K, the winner of the first season of ABC’s “The Taste,” to show her muscle raising money for youth causes.

The 31-year-old caterer and personal chef may look like a rebel with a butcher knife with her fauxhawk and tattoos and even her unique concoctions that she serves up to her celebrity and royal clients, but she has a heart of gold.

When she’s not cooking up star quality dishes for celebrities, royalty and other notable people, she’s taking her mad skills in the kitchen to help uplift at-risk youth such as gay, lesbian, bisexual and transgender, ex-prostitutes, runaways and substance abusers.

She enjoys cooking for Hollywood stars and other notable people and their families, she says, but her whole heart is reserved for the troubled youth she tirelessly fundraises for organizations that serves them.

A regular at throwing benefit bashes for organizations such as Children of the Night and Spare Some Change to name a few she often attracts upward of 1,000 people raising thousands of dollars to help change youths’ lives.

So, when she learned that EDEN Pride Events, which invited her to be a celebrity host at EDEN Pride Weekend San Francisco, had a foundation to help LGBTQ youth she jumped on the opportunity by offering to host a brunch. 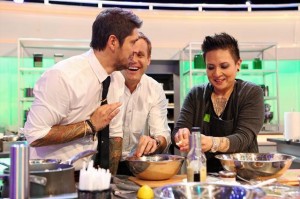 “I get excited when everyone comes together for a certain cause, especially for LGBT youth,” says Chef K. “I’m actually doing something that I love and helping a cause that I support.”

“We were thrilled when Chef K agreed to be one of our celesbians for the weekend,” says Christine De La Rosa, producer of EDEN Pride Events, which produces EDEN Pride Weekend San Francisco.

“Originally she was only going to be our guests for our evening events,” but when it was suggested to Christine that Chef K wanted to do a fundraiser for the foundation she was doubly thrilled. “We were beyond excited. This is such a great cause and to have Chef K help us as we help others is an honor.”

Just in case you didn’t know, Chef K is the personal chef for Charlie Sheen, Denise Richards, director James Cameron and Selma Blair and other notable people. She’s even cooked for the Royals of Saudi Arabia.

“There is more of a heart to it, as they say, ‘The kitchen is where the heart of the home is.’ So, being there and being able to share what I love to do and having smiles from the families and the little children … it’s great validation,” says Chef K about cooking for her clients and their families.

A star in the kitchen, Chef K is also a rising celebrity alongside the notable people she serves up her delicious dishes to. She is the first lesbian client on Bravo’s “Millionaire Matchmaker,” appeared on the Food Network’s “Chef Wanted with Anne Burrell” and Showtime’s “The Real L Word.” 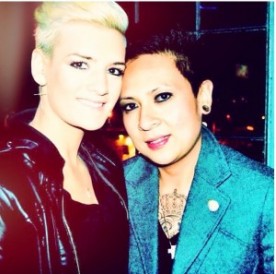 There was a love match on “Millionaire Matchmaker,” (spoiler alert!) but not with the girl you think it was, if you follow the show. Chef K gave millionaire matchmaker Patti Stanger the slipped at one of the mixers when Brittany Wiener, a girl at the mixer, snuck into a back room with Chef K who slipped her one of her coveted cards.

Brittany and Chef K have happily been together for nearly a year now.

“I love the city,” says Chef K, planning the couples’ after-Pride itinerary around the city and up to Napa. “I might take another day or two to just enjoy the city and the food, which I love.”

And Brittany wants to see it all.

“She really wants to see it all. She even wants to see Alcatraz, eat dim sum, [and go to] Fisherman’s Wharf.”

This will also be a first for Chef K. She’s always been swinging single at Prides in the past, this time she has her main squeeze to share it with.

“I’m excited to see how the parties go down with EDEN with my girlfriend beside me all weekend long,” says Chef K. “It’s going to be a fun weekend.”

On being a celebrity chef

Being a Reality TV star has change Chef K’s life “pretty drastically,” she says gratefully. Sure, she found the love of her life on TV and she can’t go into Whole Foods without being stopped these days, but the biggest bonus about the spotlight has been changing people’s perceptions. Her presence and audiences following her challenges on TV has taken the fear out of seeing only the tough exterior to seeing the real soft core of the tatted lesbian chef.

She often stops to chat with people and answer their questions about cooking, food and talk about the shows they’ve seen her on, she says.

“The most welcoming thing that came out of the show is that even the straightest of the straight in middle suburbia has come up to me and said you deserve it,” says Chef K about her recent win on “The Taste.”

“I think the biggest thing that I got from this [is that] people changed their minds,” says Chef K about the normalization of knowing her. “They are not so scared, they are not so intimidated to see a lesbian tatted person in their kitchen or walking down the street.”

Get into the kitchen with Chef K at ChefKLA.com or KhristianneUy.com.