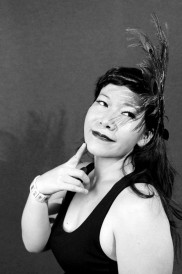 Feeling there was a strong need for queer artists of color to come out on stage and shine their talent Celeste Chan and KB Boyce founded Queer Rebels Productions based in San Francisco in late 2008. Their goal: to showcase queer artists of color, connect generations, and honor histories with art for the future. Chan and Boyce delve in to the deeper understanding of art and history and put them together to create incredible projects and shows for the community and beyond to further advocate for LGBT equality.

Before developing their production agency, Chan was studying International Feminism and video production at Evergreen State College. Later, she got involved in community-based work in the Bay Area working with Incite: Women of Color Against Violence (Oakland, Calif), Shifting Narratives Film Collective (San Francisco) and the Femme Conference (National). Boyce on the other hand is a two spirit musician developing a solo act called TuffNStuff: The Lasta Dela Drag. Boyce served on the Trans March steering committee and co produced the Radical Performance Fest. Chan and Boyce both curate and they always scout talent and reach out to queer artists of color. This past year, they ran their first open call for submissions to Exploding Lineage: Queer of Color Experimental Films. Chan tells us how Queer Rebels came be.