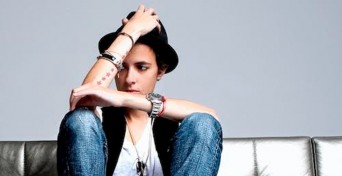 PALM SPRINGS, CA — Celebrity DJ Samantha Ronson is about to tear the decks at the biggest lesbian event in the planet of its kind: The Dinah.

She’s selling out clubs around the world and has become celebrities’ “it” girl when it comes to putting the needle on the hottest records and keeping the beat going at their private parties. Samantha Ronson is one female DJ who can seriously throw it down.

Mariah Hanson, founder and producer of Club Skirts Dinah Shore Weekend, has confirmed that The Dinah 2016 (March 30 – April 3) will feature one of the most respected and best-known DJs in the lesbian community as Samantha Ronson guest-deejays the event.

“Samantha Ronson is one of the premiere celebrity DJ’s, but she’s also the real deal. Our crowd is going to be blown away at her talent, energy and presence. I’ve wanted to book her for years so for me, it’s an extra bonus that I am finally able to headline her at The Dinah,” comments Hanson.

Making a music career as a professional DJ was never farfetched for the London native.

Samantha Ronson comes from a significant artistic lineage. Her stepdad is Mick Jones, the legendary guitarist of the iconic rock band Foreigner; her brother, Mark Ronson, is a Grammy Award-winning producer famously credited with making Amy Winehouse a household name; and her sister is a famous fashion designer.

With plenty of talent to go around in her family, the Venice-based artist holds her own DJing the biggest parties and clubs all around the world. Her electrifying live set will leave you wanting more as she pushes her sound, along with the crowd to the limit.

What an accomplishment for someone who fell into DJing by chance. With her finger on the pulse of today’s hottest tracts, she’s quickly risen through the ranks in this heavily male-dominated industry, and carries now a professional dossier that certifiably rivals some of her better-known male DJ counterparts.

Ronson has spun live for MTV’s New Year’s Eve show from the network’s studios in Times Square, as well as at the Super Bowl, Pan American Games, Sundance, Cannes Film Festival, the VMA’s and AMA’s (among others) and has helped push the music scene forward, perpetuating the growing movement of women behind the decks.

Next to DJing, Ronson also enjoys a passion for singing. In 2003, she became the first rock act to be signed to rapper Jay-Z’s label, Roc-A-Fella Records. She released a handful of songs with Roc-A-Fella — one of which was featured in the cult-classic film “Mean Girls.”

Whether it is DJing or dabbling in other creative fields, Ronson hardly ever stops. Today she continues to work her magic on the dancefloor and to bring something different to the turntables.