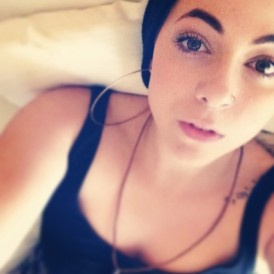 MK Nobilette, an openly lesbian 20-year-old singer from San Francisco, will be among the Top 12 taking the stage tonight on “American Idol.” Nobilette received high praise from the judges with her performance of Allen Stone’s “Satisfaction” last week, but had to dodge a bullet after landing in the bottom three as determined by America’s votes.

One of Nobilette’s most vocal proponents is her girlfriend, Casey Ellis, a talented singer/actress who tirelessly lobbies to get out the vote for MK each Wednesday night after the “American Idol” live performances. We caught up with Ellis to get the scoop on the couple’s relationship, how MK’s performances have changed since she started the show and to see if Ellis could offer any perspective on why lesbians love country singer and “American Idol” judge Keith Urban so much.

How did you and MK meet?
We met through a mutual friend and it was very much a love at first sight situation. We were immediately inseparable.

How long have you been together?
Nine months, the length of a pregnancy. (Haha)

Do you and MK share the same taste in music?
Yes! We love a lot of the same music and we always introduce each other to new music.

What song was in heavy rotation at the Ellis/Nobilette household before all the “Idol” craziness got started?
Probably “Dump Truck” by E-40 and Too Short (Haha) or “Say So” by Allen Stone because we have an unhealthy obsession with every one of his songs

What role did you play in encouraging MK to audition for “American Idol”? Was she hesitant to go for it?
My biggest role was being a human alarm clock. She will never wake up! For the audition with the celebrity judges, we were running so late because I made the mistake of trying to get ready while thinking she was getting out of bed and dressed. During Hollywood week, I called her really early every day to make sure she didn’t sleep through her alarm and she usually did, so I’m glad I did that. I also helped her with her song choices, but ultimately she was pretty independent and wanted it, so she did it!

If our research proves true and you’re the Casey Ellis we found on Linkedin, you’re quite the accomplished performer yourself. You studied vocal performance at the San Francisco Conservatory of Music and are active in musical theater. Did you consider auditioning for the show, too?
I didn’t actually; I’m more of an actress and classical singer, so I didn’t think I would have the right kind of style they would be looking for. But now I wish I would have after seeing all the cool things MK gets to do and experience every day.

When MK was named to the Top 30 on the show, she announced to the judges and the world that she was “obviously gay.” Did she ever consider attempting to hide her sexuality on the show?
No. MK and I talked about that. We didn’t think there was any hiding it, especially since I kissed her on camera right when she got through on the first round, which they didn’t show. And I thought it was so awesome that she didn’t hide it in such a historical way. She called me right after and she told me what she said and I was so proud. I was actually at a work party and starting screaming in the corner. I couldn’t wait to see how they would edit it or if they would choose to show it.

Do you think that, as Jennifer Lopez said on the show, “the world is changing” enough that America could name an openly lesbian contestant as the winner this year?
I really hope so, like with everything in me. Even if it wasn’t the love of my life up there in the running, I would be so happy and proud if we could, especially if they had those vocal cords that MK possesses.

After being named to the Top 13, MK gave a video interview in which she credited you as her vocal coach. What’s the most notable vocal adjustment MK’s made since working with you that way?
I think opening her mouth more. It’s such a weird thing but a lot of singers sometimes just won’t open their mouths when they get up in the higher register. Also, I try to calm her nerves about being onstage but she has gotten through that obstacle all on her own. It makes me so happy to see her up there looking like she belongs there.

Have you seen any changes in her vocal performances since she’s been on the show?
She gets more and more confident with every performance. I love it!

There was a lot of attention given to MK’s styling on the most recent episode of “American Idol.” She seems to be letting the stylists do their thing while staying true to who she is. What do you think of her modified look?
I love it! I used to do her makeup whenever I was bored because she has such long eyelashes and such a gorgeous face, I called her “femmekay.” But on the show, I think they are just accentuating her already beautiful mug and she still gets to wear cute snapbacks! She looks hot; I’m sad I can’t be there to see her in person.

Last week on “American Idol,” MK was ambushed by the show’s crew and asked to tell viewers five things about herself that people wouldn’t know. She shared that she’s a mediocre snowboarder, an awesome goalkeeper, loves Beyonce’s “Single Ladies,” wishes she was a dancer and loves dogs. What five things would you have shared about MK, if the camera crew had asked you instead?
I would have kept the love of dogs and awesome goalkeeper, but I think I would have added that she is such an amazing, caring friend; that she likes to be read to; and that she’s the best anniversary gift-giver.

We’ve seen MK’s moms in the “American Idol” audience and MK has acknowledged their support, as she has with yours. Will we be seeing you holding up “We love MK signs” in the audience at some point?
I’m trying to get down there as soon as possible! My work schedule is pretty demanding though, so it’s rough. I’m there sometimes, but not on camera though,

What about this entire “American Idol” experience has surprised you the most?
The fans who are either allies or LGBTQ have written the most wonderful messages to MK and me about how they were inspired to come out or stand up for friends. There are still a lot of places that aren’t San Francisco, and I think MK and I forget that sometimes. Queer youth need a role model and I think MK is becoming that. Also, I love the fan pages for mine and MK’s relationship — so adorable.

Keeping in mind that our website is open to readers of all ages, what are you most looking forward to once the “American Idol” experience is over?
Getting to hang out and play music with my best friend again. And cuddles. Lots of cuddles.

We all want to see MK standing on stage in May with confetti raining down as she’s named the Season 13 winner. What can our readers do to help make that happen?
Vote every week, in every way you can. Tell your friends why you’re voting for MK and encourage others to as well. Send out videos of MKs performances. MK (@Mknobilette) and I (@salsaconcasey) also post a lot of info on Twitter and Instagram, so follow us on there, and just tell everyone you know. I think people forget how powerful word of mouth can be.

Final random question: Why do you think so many lesbians love Keith Urban so much?
His hair. And maybe the accent.