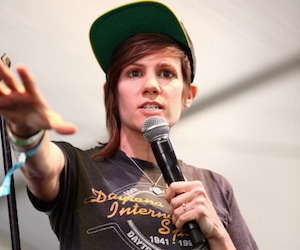 If you’re at all familiar with record label Kill Rock Stars and comedian Cameron Esposito, then you know a marriage of the two would be something that dreams are made of. As luck would have it, KRS announced this week that they will be releasing Esposito’s second stand-up album, bringing her to Portland to record in May. That gives you plenty of time to pack all your denim, get tickets and hit the Oregon Trail. If you still need convincing, or if you’re at all unfamiliar with either the legendary record label or Cameron “The Future of Comedy” Esposito, then strap in for a trip down memory lane. Seems the Pacific Northwest is about to make some more queer entertainment landmarks.