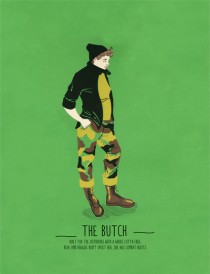 “Butch”: one of the stereotypes illustrated by the series.

Brooklyn-based illustrator Paul Tuller and creative director James Kuczynski have created a series of posters aimed to reclaim queer stereotypes and educate others. Originally, the terms were seen as something negative, ones that gay men (and lesbians) did not want to be labeled as; now, times have changed, and many embrace them. Tuller even notes, “Labels of any kind can be polarizing and exclusive, but at some point the community reclaimed these words as something more. I wanted to celebrate that.”

The six different posters, including a butch lesbian, are now on sale at Society6 for $18 each. A portion of the proceeds goes to the Think B4 You Speak campaign by the Gay Lesbian Straight Education Network (GLSEN). The organization raises awareness of the harm related to use of homophobic words and phrases, such as the commonly used “That’s so gay.”