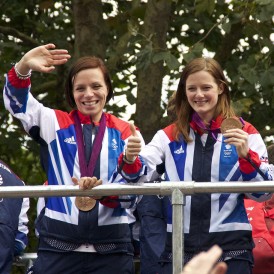 Walsh and Richardson (Photo via Joebelle/Flickr)

Kate Walsh and Helen Richardson placed third in the London 2012 Olympics. Now, with a five-year relationship under their belt, the two British Olympians are set to enter into a civil partnership on September 14, 2013.

Walsh, captain, and Richardson, a midfielder, became engaged in January and plan to have their ceremony in Henley-on-Thames, near where they live.

Though the entire hockey training squad is invited to the wedding, Walsh is hoping to avoid the “cheesy” guard of honor with hockey sticks.