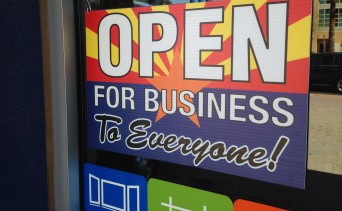 Arizona Gov. Jan Brewer announced in a press conference held late Wednesday afternoon that she vetoed SB 1062. The controversial legislation would have allowed individuals to assert their religious beliefs as a reason to refuse service to prospective customers. Critics argued that the law would have legalized discrimination against the LGBT community.

“After weighing all of the arguments, I have vetoed SB 1062 moments ago,” said Brewer in a press conference held at 4:45pm local time. She added that she had made the decision she knew was right for her state.

“We thank Gov. Brewer for her decision to veto this outrageous measure — a law that if enacted would be bad for Arizona people and the Arizona economy,” Carey said. “In doing so, she has stopped a bill that both cynically uses religion as a smokescreen to justify discrimination and insults people of faith who feel that discrimination is morally wrong. This decision sends a clear message that extremism is totally unacceptable to people of all political persuasions.”