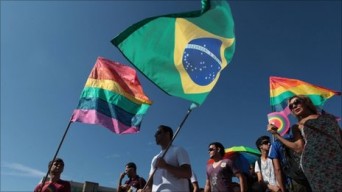 History has been made in Brazil as the National Council of Justice voted 14-1 to support a resolution stipulating that gay and lesbian couples should be able to receive marriage licenses throughout the entire country. In 2011, the Brazilian Supreme Court had ruled that it was unconstitutional to discriminate on the basis of sexual orientation, but up to this point, local jurisdictions could decide whether to offer the freedom to marry — 12 states and the federal district had already started doing so.

The council’s decision, which will be published sometime in the coming days, advises that no notary can refuse to perform a same-sex marriage. The ruling could, however, be appealed to the Supreme Court. Previous guidance had suggested that Congress needed to pass a marriage equality law, which it is considering, but Minister Joaquim Barbosa suggested this was “nonsense.”