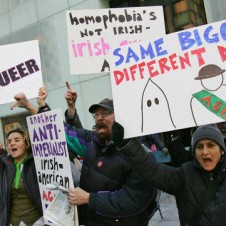 
In an echo of the parade controversy in New York, Mayor Martin Walsh of Boston, Massachusetts has announced he plans to boycott the city’s St. Patrick’s Day parade unless LGBT groups are allowed to participate openly.  The previous mayor of Boston, Thomas Menino, had also refused to participate.

The Seattle Pi reported that Walsh, the child of Irish immigrants himself, said on February 26 that allowing openly LGBT people and organizations to take part is “long overdue.”  The lead organizer of the parade, Philip Wuschke Jr., said that members of the LGBT community are welcome to participate in the parade—as part of other groups.