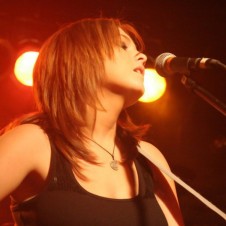 With her smokin’ gaze and commanding vocals, Hannah Thomas is a singing, songwriting, blues-rockin’ badass. The Georgia native first seized the stage at 16, taking on the open mic at Eddie’s Attic. Now 23, Thomas has racked up a multitude of accomplishments. She’s jammed with many respected artists including Amy Ray, Michelle Malone and Sonia Leigh, performed at an NFL halftime, and was crowned Female Artist of the Year by Georgia Country two years in a row. She also topped thousands of other contestants in the 2012 Georgia All Access Music Search, which led to an EP recording at Capital Records. Currently, she’s touring the East Coast, spreading her music and rebel swagger.

Thomas came out publicly at the beginning of this year. Her new CD is about taking the reigns of her own life. “I just started making music that I wanted to make and not just for commercial success…It’s about a journey. It’s about becoming myself. Even as far as coming out and living–living as a gay woman and everything in between.” Thomas spent her first birthday out playing with Amy Ray and Sarah Golden from “The Voice,” tripling the lesbian musical festivity. “My first birthday out, and I couldn’t think of a better way to celebrate it.”