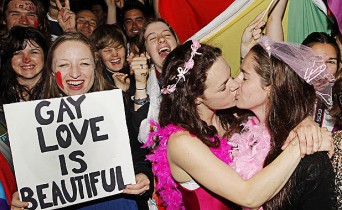 Legal or not, gay couples around the world have been getting married in creative ways forever. In celebration of that love, Google Hangouts has a new ad about one especially unique way it can be used: to have a wedding ceremony in a country where same-sex marriage isn’t legal, conducted via video call by someone in a country where it is.

Though such a ceremony would be only symbolic in countries where marriage equality is not recognized regardless of where the wedding was held, including the United States, for those whose countries do recognize them, having their ceremony online might mean the difference between having to save up for years to be able to make the trip–or never being able to be legally wed at all.