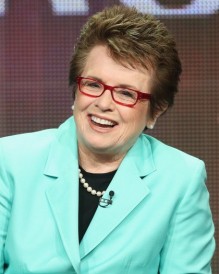 Retired tennis champion Billie Jean King on Monday said individual athletes should decide whether to compete in the 2014 Winter Olympics that will take place in Sochi, Russia, early next year. King, who came out as a lesbian in 1981 after her relationship with her secretary became public, spoke about calls to boycott the Sochi games as outrage over a law that bans gay propaganda to minors in Russia and the country’s overall LGBT rights record continues to grow.

“The athletes who have the most to derive from it and the least to derive from it if they don’t go, I think they should get the vote,” she said in response to a Washington Blade question about the issue on a conference call during which she discussed an episode of the PBS series “American Masters.” “This is the Olympics. This is about the athletes and the fans, so it’s a really hard call.”