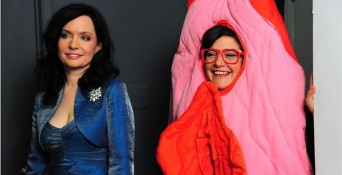 Now that festival season is over, it’s time to name the best lesbian films released for home consumption this year.

Who’s Afraid of Vagina Wolf?
This twisted lesbian homage to the classic “Who’s Afraid of Virginia Wolfe?” stars lesbian legend Guinevere Turner, who won a fistful of awards for her role in this feature. Written by the wacky and wonderful Anna Margarita Albelo, it also stars Carrie Preston from “True Blood,” Janina Gavankar aka Papi from “The L Word” and the super hot Agnes Olech.

The film explores the love life of 40-year-old brilliant and introvert filmmaker Anna against the backdrop of her “Who’s Afraid of Vagina Wolf?” production. Plus there’s a giant vagina costume, so you really can’t lose.

A Map for Love
Hmm, a GPS for love might be more helpful, but a map would be great, too. This film explores the tangled relationship between a woman, her mother and her lover. It’s intense, honest, funny and gorgeous.

Set in bustling Santiago, Chile, and on a sailboat trip in the bay, “A Map for Love” sails into deep emotional water as the triad confronts each other and themselves.

Woman’s Lake
A long weekend, a beautiful chain of lakes and two very different couples explore the wilderness and their shifting passions.

Reaching for the Moon
Passion and poetry preside in this film based on the true love story of American poet Elizabeth Bishop and Brazilian architect Lota de Macedo Soares. Two remarkable actresses — Miranda Otto (“Lord of the Rings”) and Brazilian TV star Gloria Pires — embody these historic characters as they embark on a passionate love affair.

Margarita
On screen chemistry sizzles as Margarita, an undocumented nanny with a precarious job, tries to get her girlfriend Jane to commit.

The winner of the Berlin Film Festival’s Teddy Jury Award, “Concussion” earns rave reviews for its frankiness, eroticism and vulnerability.

Blue is the Warmest Color
Nope, it’s not yellow. Winner of Cannes top prize and nominated for a Golden Globe, this foreign feature explores the relationship between Adele and beguiling, young, blue-haired Emma. It’s a coming of age story that explores desire, love and loss.